The Persians without empathy 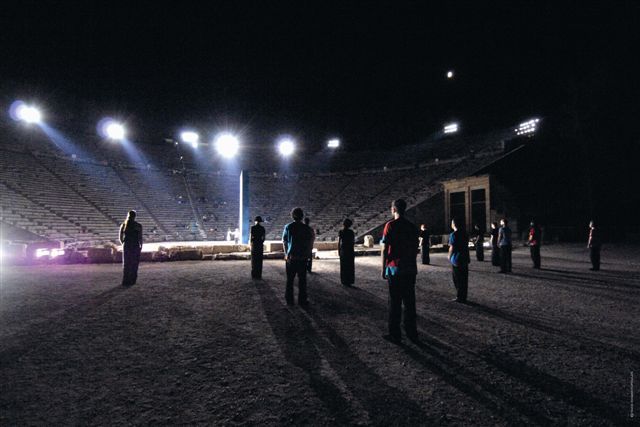 Brecht’s attack on empathy in theatre and his opposition to tragedy are inextricable: the pity for the hero implements tragic determinism and precludes critical reflection on human deadlocks. The production of Aeschylus’ Persians directed by the Bulgarian Dimiter Gotscheff for the National Theatre of Greece revealed an acutely Brechtian understanding of tragedy. Gotscheff tackled what is probably the oldest surviving representative of the tragic genre, while also dealing with the demands of the Ancient Theatre of Epidaurus. However, this was not the first time Gotscheff staged Aeschylus’ play. His Persians at the Deutsches Theater in 2006 was voted the year’s best production by the German audience. The recent staging which received its premiere at the Epidaurus Festival in August 2009 was a revival of the earlier production. This time Gotscheff worked with a Greek cast and adjusted his staging to the open-air space.

The Brechtian staging of the Persians created an interesting confrontation with the play, which is inevitably associated with the notion of empathy. The Persians is the only extant tragedy which is based on an actual historical event. The action contemplates the defeat of the Persians in the sea-battle of , in which the dramatist himself had participated just eight years before writing the play. There is no consensus whether Aeschylus celebrates Athenian democracy or warns his contemporaries against the hybris/power trap; however, in either case the presentation of the side of the defeated urged Athenians to sympathise with the Persians through the pity for the victims and fear of hybris. If the dilemma of the tragic character elicits empathy for the other, the Athenian spectators watching the Persians faced not only their long-standing enemy but the other part excellence.

Gotscheff’s production did not engage with the polarity between Greeks and barbarians at all. His adaptation offered less a reading of the Persians than an interrogation of flawed power politics as the driving force of history. And unlike Aeschylus, Gotscheff did not view history in the light of tragedy but, on the contrary tragedy in the light of history. According to the production, history cannot provide the material for tragedy because it is totally senseless. Therefore, the hubris of the Persians cannot be contained within the dialectic of tragedy; it is absurd and ridiculous rather than tragic.

The production stressed the isolation of the three royal characters, Atossa (Amalia Moutoussi), Darius (Minas Chatzisavvas) and Xerxes (Nikos Karathanos). Atossa’s concern was solely with the fate of Xerxes and not with the loss of the people. She made clear that Xerxes would continue to rule over the empire whatever the outcome of the Greek expedition. In order to show her distance from the people, the actress moved between the orchestra and amongst the spectators in the central column of the theatre. The apparition of Darius in the production did not illuminate the religious background, which H.D. Kitto regards as vital to an understanding of the play. Darius here has no wisdom to offer; he behaves like a mob orator addressing the crowd. His representation is reminiscent of a tyrant or dictator. The insanity of power culminates in Xerxes’ hysteria, while the play ends with Atossa and Xerxes meeting away from the orchestra, up in the spectators’ area. It is a move out of the possibility of empathy and, thus, out of tragedy.

The set-design by Mark Lammert illustrated the idea of history as a circular, self-repeating and destructive mechanism through a tall moving wall of light-blue colour – probably an allusion to the Persian debacle in the sea – that the actors turned around at certain moments of the stage action. The sharp and plain lighting-design and the elimination of music to sound effects emphasised the desired clarity. All actors appeared in contemporary-atemporal costumes which functioned as dynamic visual elements during the performance. The multi-coloured T-shirts of the chorus were used to create visual images, while Xerxes wore only a loose pair of trousers which exposed his vulnerability. The appearance of Atossa changed according to her position on the stage. In a purely Brechtian way, every time she entered the orchestra she identified herself as a queen putting on high heels, demonstrating her high rank to the chorus.

The quotation of passages from Heiner Müller’s poetry and theatre was key to the production. Both Gotscheff and the Greek translator Eleni Varopoulou worked closely with Müller’s version of Aeschylus’ play (based in turn on Peter Witzmann’s philological translation), which removes any triumphant or lyrical undertones that previous translations have attributed to the ancient text. Gotscheff’s adaptation introduced an extra character who interrupted the action, undermining the power system of the play (Lena Kitsopoulou). Despite his aversion to tragedy, Brecht admits that Greek tragedy disrupts the illusion through the use of the caesuras (“Einschnitte”) of the chorus. The function of this character was similar to Brecht’s interpretation of the ancient chorus.

Gotscheff substituted the chorus of elderly Persians with a female chorus, helpless and deprived of political status or authority. The lament of the original chorus gave place to the women’s fragmented unrest while they are struggling in vain to make sense of the events. The Messenger’s speech was delivered by a male chorus of equal members. Gotscheff’s admitted intention was to represent the dissolution of the autonomous subject into a mass as the precondition of imperialist politics. The male chorus uttered the famous yell ὦ παῖδες Ἑλλήνων ἴτε as an echo fading away. Aeschylus might have warned the Athenian citizens against the hubris of the victors; in Gotscheff’s production, victory itself becomes a contested notion. This was the most probable reason why the production was badly-received by the Greek audience, who is used to a theatrical tradition that uses the Persians as a declaration of national superiority.

The extract from Müller’s Philoktetes about the limitations of human perception addressed to the audience by the added character in the performance offered an indirect comment on the art of theatre itself. If the eyes are incapable of seeing the truth, then theatre as the quintessential art of seeing cannot but present a deceptive image of the world. In a similar way, the production also commented on the ambiguous character of empathy. Empathy is the cornerstone of tragedy as it is the cornerstone of humanity; but it is also a means to reduce the other to an object of observation which proves one’s own superiority. Gotscheff’s production went beyond the question whether the Persians is a demonstration of Greek superiority in order to demonstrate that victors and victims meet not only in the tragedy but also in this parody of history.