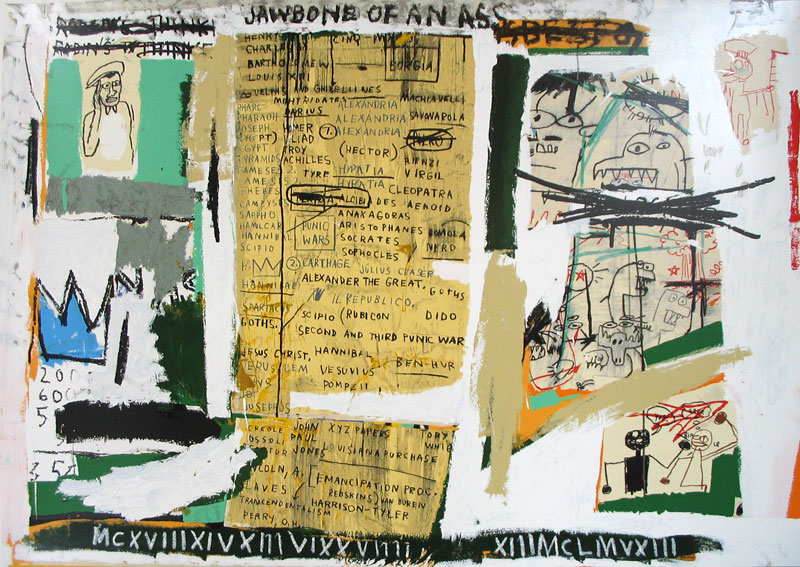 For the briefest flicker of a tin' moment in the mid-'80s, New York's streets and subways came alive with Twomblyesque cave-scratchings and the screaming confusion of five-fingered fury. 'SAM0', as in 'same old shit', keyed the eye to the new language. It travelled well, deep into the hostile incubators patrolled by Mary Boone, Annina Nosei, spiralling up to rupturous suspicion with the Warhol collaborations at Tony Shafrazi's.

'Nothing to be gained here'

This is NOT Black Art, I maintain, and this is not ART, well no, this is STUFF and I like it, yeah, yeah, yeah. This STUFF rocks. A two-headed Janus of an approach, vomiting and questioning at the same time. A squash of Schwitters sound and nonsense, leering tabulations of pre-Socratic philosophers' jostle, or rubber 'gainst Penk. Like a baad reading of Lautremont's 'Beautiful as the chance encounter of a sewing machine and an umbrella on a dissecting table'. But nothing surreal here. The dreaming is force-fed into the dawn of our consciousness. Confuse me, sir? Well bless you, yes please. Chance juxtaposition. Your chance is not the same as my chance.

Waking up every day to a world of pieces and bits we spend the remaining hours putting it into some kind of form we can deal with. No order, no function. Basquiat takes a cursive swipe and re-establishes the disorder that is reality. The pure joyful chaotic miasma of it all. Goo-goo-ga-joo. Refracting fact fractions facting refact. He's milking the diction-dairy, wiping up the puddles of Anglo detritus and scoffing the lot. He's stealing us limb by word.

Henry Geldzhaler: 'Many Renaissance paintings have what's called "pentimenti", changes where the "ghost" head underneath, which was five degrees off, will appear'. Jean-Michel Basquiat: 'I have a painting where somebody's holding a chicken, and underneath the chicken is somebody's head'. 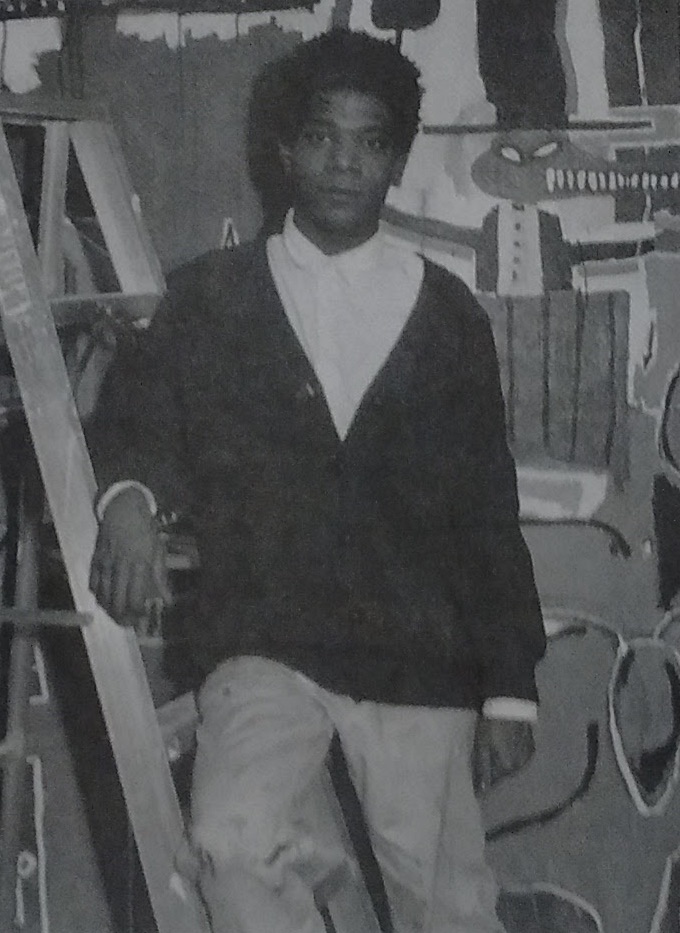 All young black men in white worlds know more about white than white know about black. For hundreds of years they have been subjected to histories, posters, lectures, cartoons, dinner conversations, listened to in silence from the shadowy corners, pontifications on how white speak - sit - think - walk - talk that talk.

Then film, tv, advertising, media, everything white — it's all there — anger, manipulation, generosity, rationality, jealousy, love, hostility, each and every nuance that, brick by brick, builds the bridge to the Caucasian fields. Meanwhile, on the other track-side, stereotype black dance-sing-disgruntled, not satisfied-with-their-lot, above their station or happy-loyal-where-would-I-be-without-Massa subservience. Until developments of the past few decades, this was the white-invented form we imposed on the West-world black. When the black artist refuses to be harnessed by the form and content of a patronising art-world, he creates a raging maelstrom into which all the carefully propped-up relics of cultural conditions are sucked and crushed. All revealed, the bars of the captor's prison are bent, twisted and gleefully reshaped into the budding flower of emergence. Bruised, bashed and battered, finally unmasked, the grin sneers at the bigotry and idiocy lying wasted on the Roman cobbles; from the flat white-walled cubes the lips whisper, 'I caught you smilin' again'. Blushing and irritated, the white viewer quickens his pace while the screaming fills his ears: 'I'm gonna Fuck You Up'.

March Out Backwards, Sideways, Down

'One of the greatest roles ever created by Western man has been the role of "Negro". One of the greatest actors to play the role has been the "Nigger".' Henry Dumas. What makes Basquiat's work so powerful is his transcendence of the black-white posturing and the truly dignified indifference of the existentialist... I feel the very moment of his brush or crayon touching the canvas. There is a burning immediacy to his ever evaporating decisions that fires the imagination ten or fifteen years on, as freshly molten as the day they were poured onto the canvas. But, unlike Graham Greene, say, who in his youth would steal his father's army pistol, sit quietly in the woods near home and click off a solipsistic game of Russian Roulette to give his young life an edge, Basquiat had no choice but to grasp at the minimal options open to him on the streets of New York, hold on like hell while the meteor of fame dragged him up to its full ascendancy; eventually to deaden the pain of the burns and welts of jealousy with heroin.

In between times, he borrowed or crafted a life for himself. His background history would change with every telling. Although he managed to put most people off the scent, his reality must have been something like this. He was brought up in Park Slope, Brooklyn, the eldest of three children. Two sisters, Lisanne and Jeanine. His Haitian-born father, an accountant, secured a good middle-class salary; young Jean-Michel went to private school. His mother, a Puerto Rican, encouraged his obsession for art, introducing him to various pictures and styles through their visits to museums and galleries. They were close, and her temporary institutionalisation for treatment of a mental illness veiled Jean-Michel with a certain sadness.

At around eight years old, a car accident put him in hospital for an unspecified period, probably months, cutting him off from friends and familiar places. Matilde, his mother, brought him a copy of Gray's Anatomy, possibly to explain the ins and outs of the operation to remove his spleen. The skeletons and skulls that frequent his work may well have been triggered by this illustrated tome. Around ten years of age, his mother and father parted, dad taking the kids with him to live with a white English woman. From his first days as a tag or graffiti artist, his efforts at making good relationships were thwarted by his own singular sense of drift.

Irony is, of course, that this sense of not belonging is one of the great strengths of his STUFF. He knew as much as he needed about art and probably a whole lot more than his contemporaries, and there is no great shrieking voice of proven Blackness here. As he himself would insist, when asked, 'I am not a Black artist, I am an artist'. It comes as no surprise to learn that he had a not-so-hidden ambition to be a rock musician, as his work relates to rock in ways that very few other visual artists get near. He seemed to digest the frenetic flow of passing image and experience, put them through some kind of internal reorganisation and dress the canvas with this resultant network of chance. Word ensnared by colour. Shape qualified by phrase.

After Warhol's death in 1986, Jean-Michel himself started to die bit by bit. This ugly and tragic coda will probably be the Hendrix-Cobain factor that will speed his reputation into the beyond. The Temple of Guys who died for their art. It's a drag. Rubber-necking at the crash-site shall take place. The more STUFF that goes up on the wall, the less it will be seen. Eyes searching for drug clues — how black was he, how white inside, can you see him being sad or happy? Look for a long time and we'll see him wave. The wave he would have liked us to see was the surf-wave of free-association, uninhibited and loaded with a new fractured language, a street-map for a city not yet designed, a dialogue with our sub-present. His STUFF is the continually dividing cell of our future-past. Embryos with all the cross-referenced features in place. But the stash was terminated before maturity. I should like to have seen it all grown-up. 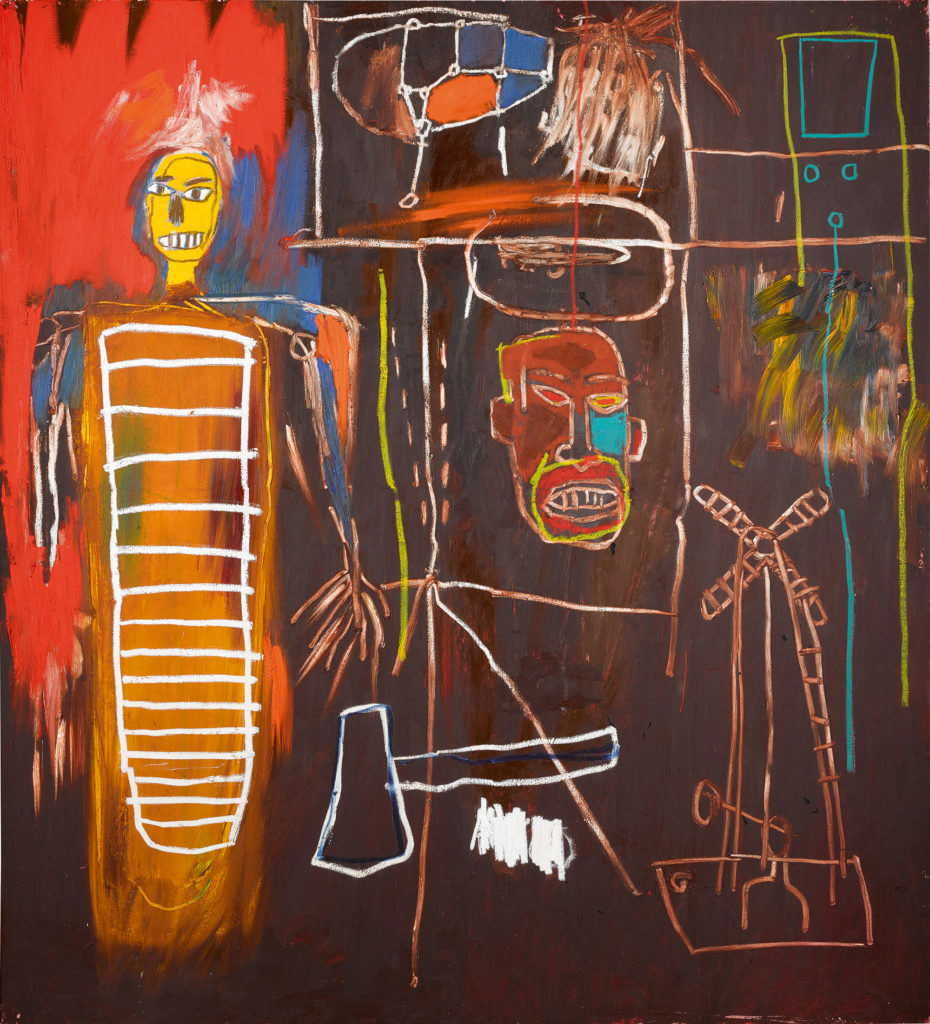 During the years in which David Bowie was a member of the editorial board of “Modern Painters” magazine, he dedicated a tribute to his friend Jean-Michel Basquiat, who died in 1988 of a drug overdose. It was the Spring of 1996, and that same year, just a few months after, the biopic by Julian Schnabel on the Haitian-American artist, where Bowie masterfully plays the role of Andy Warhol, was set to come out.
Through his cultured writing − full of quotations ranging from literature to visual arts −, yet still wistful and imaginative, Bowie emphasizes his most personal reasons for his affection towards Basquiat’s art: through his explosive disorder of images and words the artist restores the true essence of reality and creates 'a new fractured language' which may remind Bowie of the 'cut-up' technique with which he often wrote the lyrics of his songs.
Bowie then addresses the theme of art’s social history. He reminds us of the progressive rejection of black artists in submitting themselves to the white paternalistic system of art and how, in turn, Basquiat transcended these issues, he transcended black and white posturing by declaring 'I am not a Black artist, I am an artist'.
Through some episodes of Basquiat’s life, Bowie finally traces the roots of his artistic imagination; like, for example, when he was admitted to the hospital as a child, and his mother gave him a Gray’s Anatomy illustrated manual whose skeletons and skulls, transfigured, will become an obsessive theme in the work of Basquiat (and Gray would become the name of his rock band).