Left to right: fig. 1 | A Graece-Roman (2nd century BCE) amphora retrieved from the shipwreck site of Grand Congloué is carried by archaeologist Ferdinand Lallemand, much as a stevedore would have carried one onto a ship in ancient times (see Fig. 2). Edgerton Digital Collections, [HEE 0006] courtesy of the MIT Museum © 2010. Fig. 2 | Stevedore carries an amphora on board a ship; second century floor mosaic at the Piazzale delle Corporazioni in Ostia (statio 25).

Amphoras, the two-handled transport containers of antiquity, constitute an important archaeological marker for researchers tracing the history of commerce and food production in antiquity [Figs. 1 & 2]. Found at archaeological sites across the ancient Mediterranean region, these ubiquitous ceramic vessels were also produced in elegantly decorated varieties to commemorate special events, as trophies or as status symbols for wealthy patrons. In relation to the ancient wine trade, amphoras are key artifacts that illuminate many customs and stages of use. 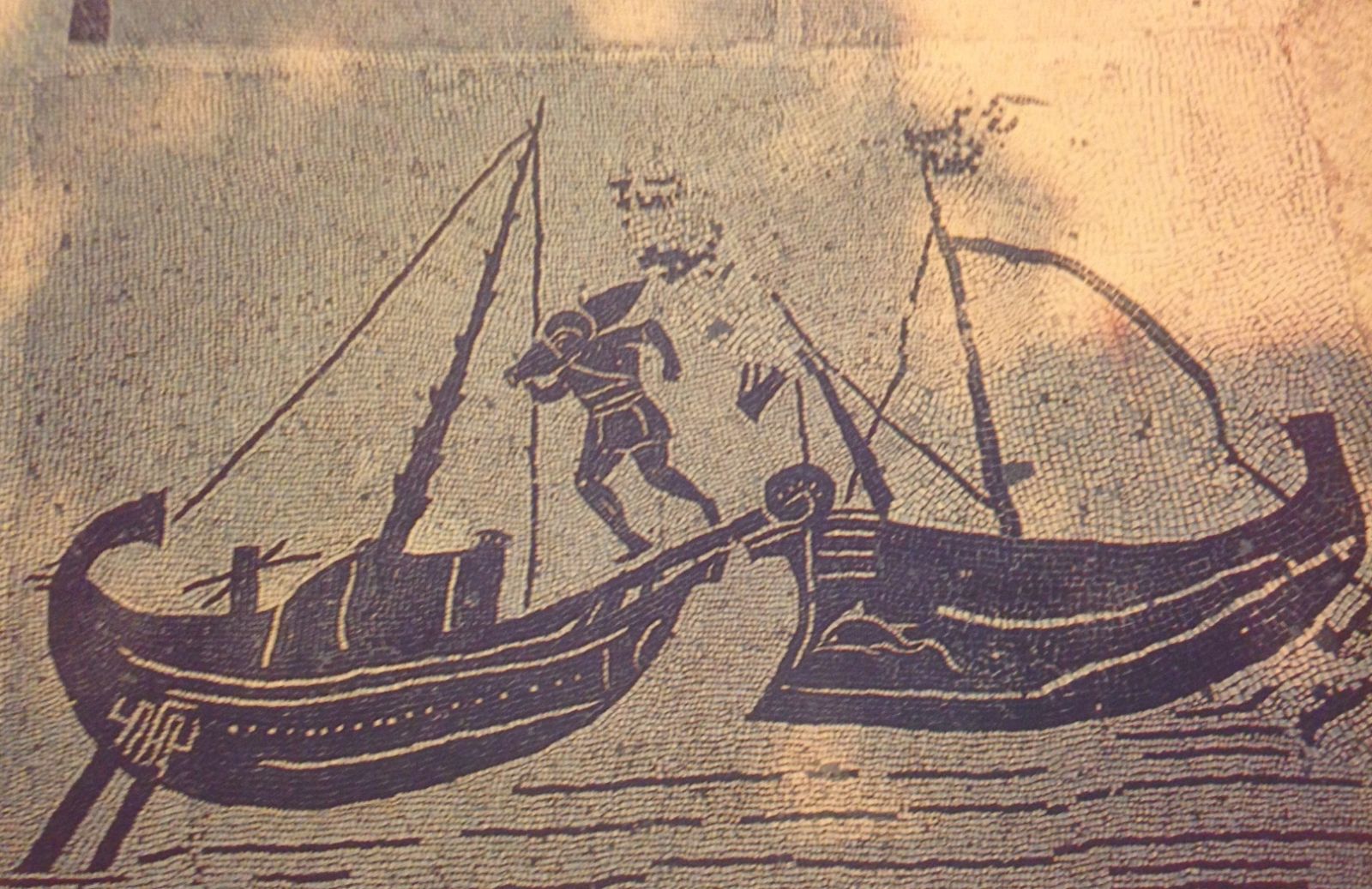 The word 'amphora', referring to the characteristic two handles, is a Latin derivation of the original Greek word combining the terms amphi (‘on both sides’) and phoreus (‘carrier’). These utilitarian jars were typically narrow-necked, bellied containers ending in a tapered toe that facilitated handling and stowing in stacks aboard ships [Fig. 3]. Intended for long-distance transportation and for storage, they were made of ceramic, and could be sealed with a variety of stoppers and plugs made of clay, pitch, wood, cork or stone to protect their contents. Over time, amphoras were produced in distinctive types that reflected provenance, capacity and typical contents. Their volume varied by type, between roughly twenty and thirty liters.

Left to right: fig. 4 | Excavations reveal recycled amphoras that were used to form a hard at the Red Sea harbor of Myos Hormos (Quseir al-Qadim, Egypt). Photo D.P.S. Peacock, courtesy of the University of Southampton UK. Fig. 5 | Monte Testaccio in Rome, an artificial mound created from the accumulation of discarded olive oil amphoras near the city’s river harbor.

Intrinsically strong, cheap and durable, amphoras were also recycled in ancient times, as amply documented in contemporary literary sources as well as excavation finds. They could be used as secondary containers for foodstuffs, repurposed for construction fill for roads and walls, converted into drainage tubes, cut into burial containers, or laid down as hards at harbor sites, as at the Red Sea site of Myos Hormos [Fig. 4]. Indeed, amphoras and their remains are found in a broad range of archaeological contexts. Discarded olive oil amphoras offloaded from ships along the Tiber over the course of several centuries created an actual mountain in Rome, Monte Testaccio [fig. 5] ­– a trove of information regarding state-controlled olive oil imports of the time. The analysis of amphora finds offers clues to distribution systems, patterns of consumption, and control of production – essential elements of economic and social history.

Coarse-ware transport containers have been used for thousands of years, and associated with wine since at least the early Bronze Age in the Levant and Egypt. The eastern Mediterranean region is also where we witness some of the earliest examples of large-scale maritime commerce using transport amphoras: dozens of Canaanite two-handled jars carrying a shipment of terebinth resin were found on the fourteenth century BCE Uluburun shipwreck off the Anatolian coast (Pulak 1998). By the eighth century BCE Phoenicians were transporting uniform ship cargoes of wine amphoras along the Levantine littoral (Ballard et al. 2002). Over the course of subsequent centuries, the range of bulk and compound amphora cargoes points to a variety of maritime networks and scales of exchange that fluctuated over time and space, from local to broader state-controlled systems of trade (Parker 1992). 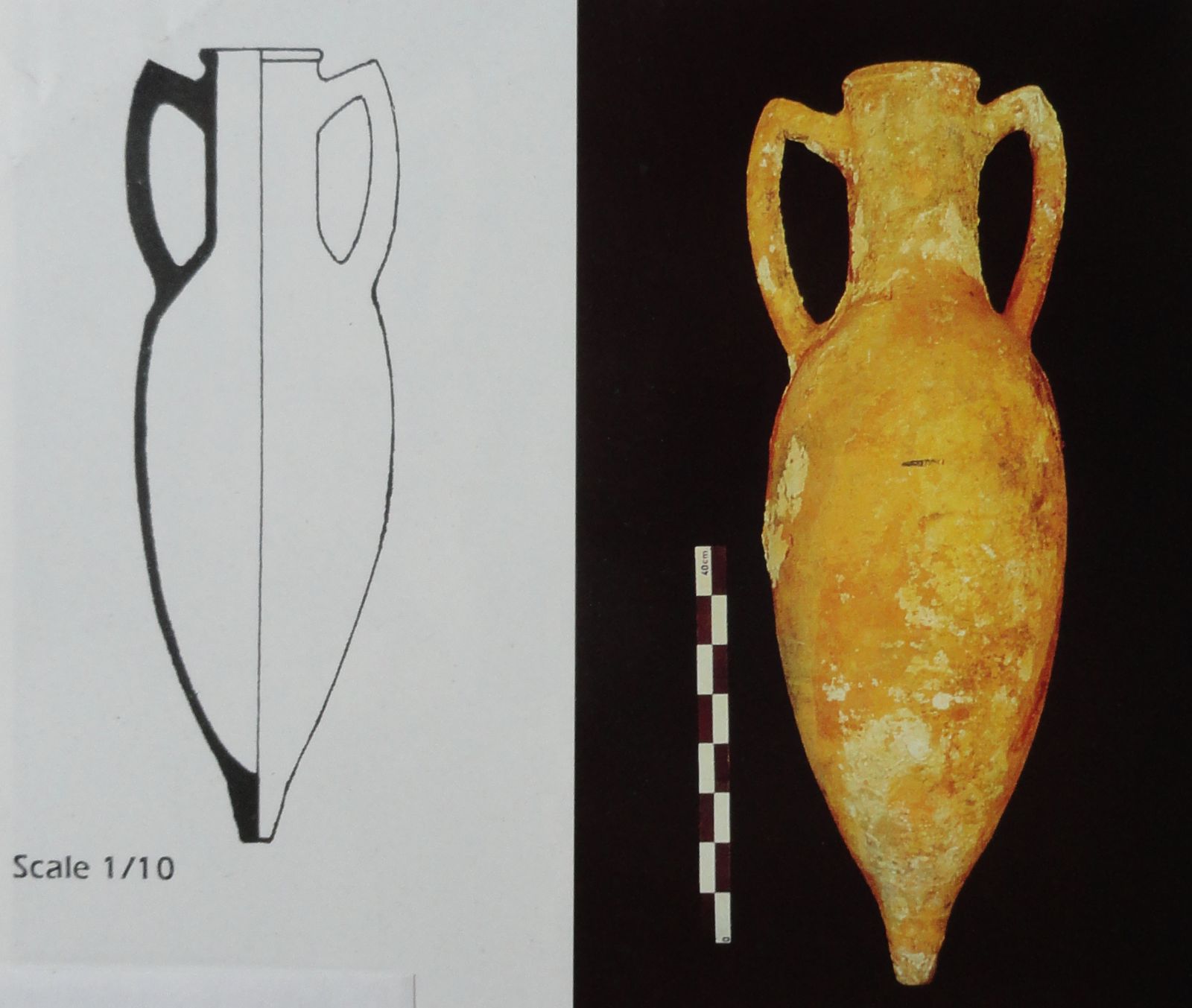 Regional styles of amphoras, likely evolving out of local water jar types, became increasingly differentiated during the Archaic period as Greek city-states sought to distinguish their wine and foodstuff products for trade. Through the Archaic and Classical periods, the shifting distribution patterns of amphora finds reflect evolving economic and historical conditions. For instance, the spread of distinctive pointy-handled Rhodian amphoras across the Mediterranean world signals the development of Hellenistic Rhodes as privileged trade emporium [fig. 6]. The growth of Roman hegemony across the region is echoed in the increasingly standardized and industrialized production of amphoras as well; fewer amphora types were manufactured within much broader geographical areas than in earlier times, and lasted longer. By the early medieval period ceramic transport containers gave way to less durable materials, and long-distance trade networks weakened due to socio-economic changes; amphoras gradually disappear from the archaeological record as primary transport containers.

The vast majority of commercial amphoras were used to transport foodstuffs, from liquids such as wine and oil to solids including fish, meat, grains and fruit. Pitched linings preserved certain commodities such as fish and wine products from spoiling. Inorganic commodities could also be transported in amphoras, from beads to pottery and sand. Several shipwreck sites have yielded sealed amphoras still containing traces of their original wine contents (albeit contaminated after centuries of gradual seawater seepage!), as well as remains of seeds and other foodstuffs. In less favorable environmental conditions, the durable containers serve as proxy evidence for commodities that have not survived. 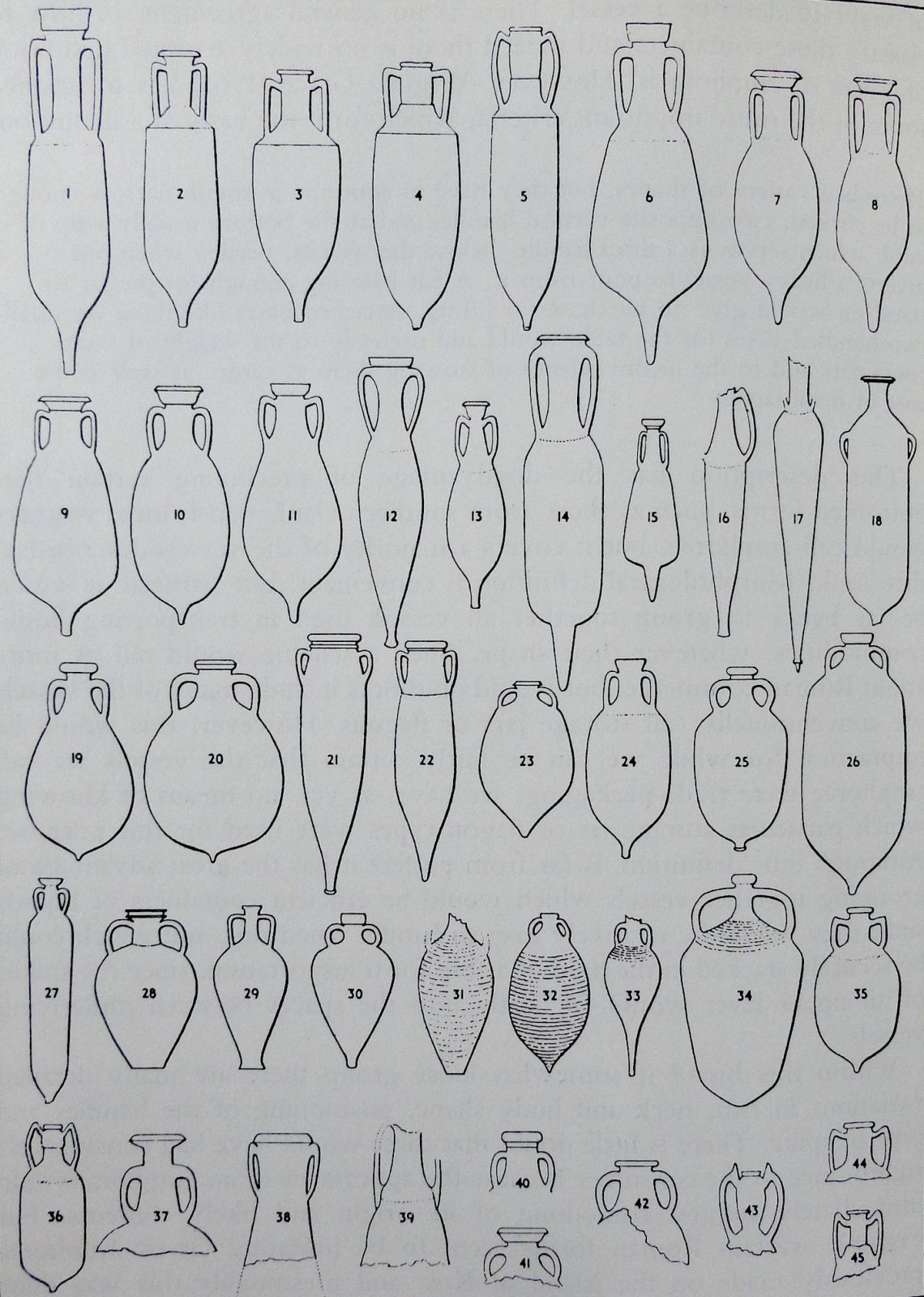 Durable amphora fragments, from plain body sherds to distinctive toes and handles, have lasted across the centuries, and their potential to yield information has evolved as new diagnostic methods and tools have developed in archaeological practice. Interest in these coarse-ware finds was spurred around the turn of the twentieth century, when Heinrich Dressel (1899) developed a synoptic table of amphora types [Fig. 7] as part of an epigraphic study he conducted of impressed, scratched and painted inscriptions found on vessel handles and bodies from Monte Testaccio and other Roman sites. These stamps and tituli picti can provide commercial data relating to the pottery workshop owner, potter, production location, annual magistrate, or content details. Dressel's table became a starting point for archaeologists to develop ever more differentiated amphora typologies, primarily categorized by form, origin, or discoverer's name: e.g., Dressel, Beltrán, Kapitän, Lamboglia, Keay, Africana, Graeco-Italic, Corinthian, and so on. Over a century of excavations have expanded the database and continue to spawn new information and debates on fine-tuning chronologies and provenance. 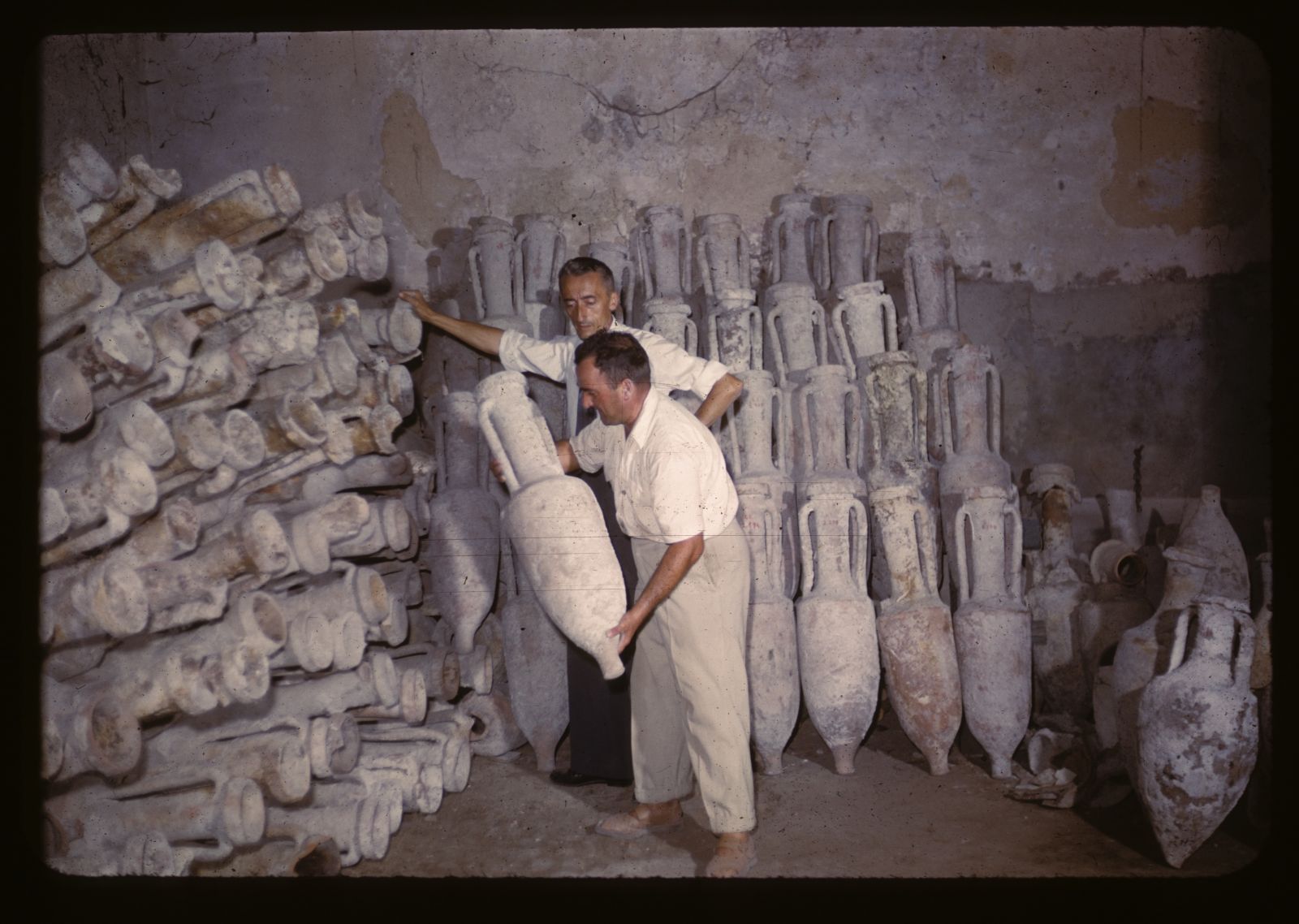 The advent of archaeological field surveying and new tools to extend archaeology to submerged regions, around the mid-twentieth century, gave a boost to amphora studies. Statistical studies can yield significant data even from the distribution and analysis of plain amphora sherds. Some of the best-preserved intact amphoras have been found on shipwreck sites, before the vicissitudes of use and wear caused breakage and dispersal. In fact ancient shipwrecks have often been discovered thanks to the visible mounds of amphora cargo on the seabed. Such cargoes provide archaeologists with chronological as well as geographical parameters for the shipment, based on the typologies on board. At the same time, mixed amphora cargoes underscore both the complexity of maritime exchanges and potential challenges of current interpretations of these finds. One notorious example occurred at the Grand Congloué wrecksite in southern France in the mid-1950s, when underwater archaeology was in its infancy: two jumbled amphora cargoes salvaged by a scuba team led by J.-Y. Cousteau resulted in confused interpretations and academic disputes, until qualified archaeologists restudied the site and determined that there were in fact two distinct wrecks, a first century BCE ship lying on top of a second century BCE vessel [Fig. 8]. In this case the correct understanding of typologies and of archaeological site formation processes proved crucial (Parker 1992, 200-201).

The challenges of interpreting the origins, dates and usage cycles of transport amphoras continue to confront archaeologists and ancient historians even as increasingly sophisticated provenancing and dating methods become available (Peacock and Williams 1986). While historians comb literary references for specific and incidental insights into the uses of amphoras in everyday life, archaeologists also turn to scientific methods including chemical and physical analyses to retrieve information about the vessels' origins and their contents (e.g., Fantuzzi et al. 2016). Organic residues can be determined using liquid chromatography mass spectrometry; tartaric acid, for example is an indicator for the presence of wine. Petrological studies of vessel fabric can point to likely production centers, where such centers have been identified. Such scientific tools are allowing a more nuanced understanding of amphora production and use in the ancient world. 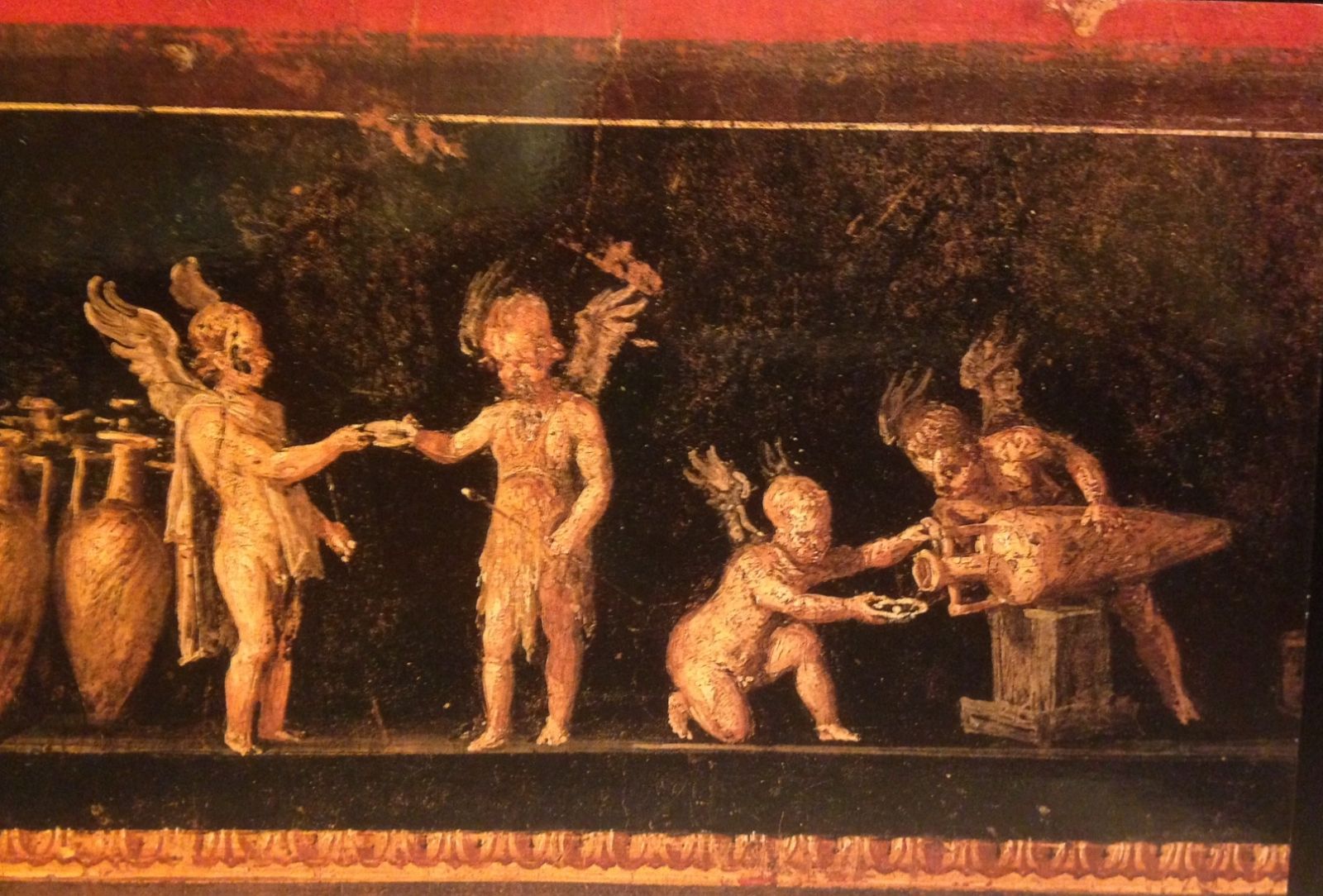 Fig. 9 | Cupids decant wine from amphoras in a playful first century CE fresco decorating the tirclinium of the Casa dei Vettii at Pompeii.

In Egypt, the discovery of amphoras still containing wine, carefully arranged around Tutankhamun's burial sarcophagus, reflects the high status and symbolism of wine consumption in Egyptian culture, documented since the pre-dynastic period (Guasch-Jané 2011). Over three thousand years later in Rome, the term 'amphora' was used to designate a specific measure of volume, and a standard prototype was kept in the Temple of Jupiter on the Capitoline Hill. Thus amphoras have played roles from the most exalted to the most pragmatic and even mundane: from religious ritual to measurement standard to construction fill. Their durability gave them long lives during their prime in the ancient world, as well as in modern times for archaeologists seeking answers to questions of trade, consumption patterns and everyday life [Fig. 9].

Trading two-handled clay storage jars known as amphorae were used for centuries across the ancient Mediterranean world to carry commodities including wine, oil and othergoods. As intrinsically sturdy structures, they survived well in the archaeological record and provide significant information about trade patterns and mechanisms. They were designed to be efficiently stacked in ship holds; so the advent of shipwreck cargo studies over the past half-century has provided a great deal of information on actual maritime trade patterns in wine. Amphora shapes evolved to reflect their origin and original content, and their painted and engraved markings indicated their producers and traders. Recycled amphorae could be used for a variety of secondary uses, including building materials. Their role in the wine trade throughout the Mediterranean area underscores complex cultural and social interactions across the regions, as drinking customs and traditions spread beyond their origins. Scientific techniques have evolved so much that they are able to give us ever more precise information about amphora origins and usage.