There are worldwide not too many scholars who are concerned with ancient Greek dance, and Choreutika is the product of the cooperation among a number of them. This book presentation, which is based on the first part of the introduction of the volume (published by Fabrizio Serra Editore), is to say which kind of research void Choreutika tries to fill and to outline its main issues and goals. For an overview of the chapters and authors, please see below. 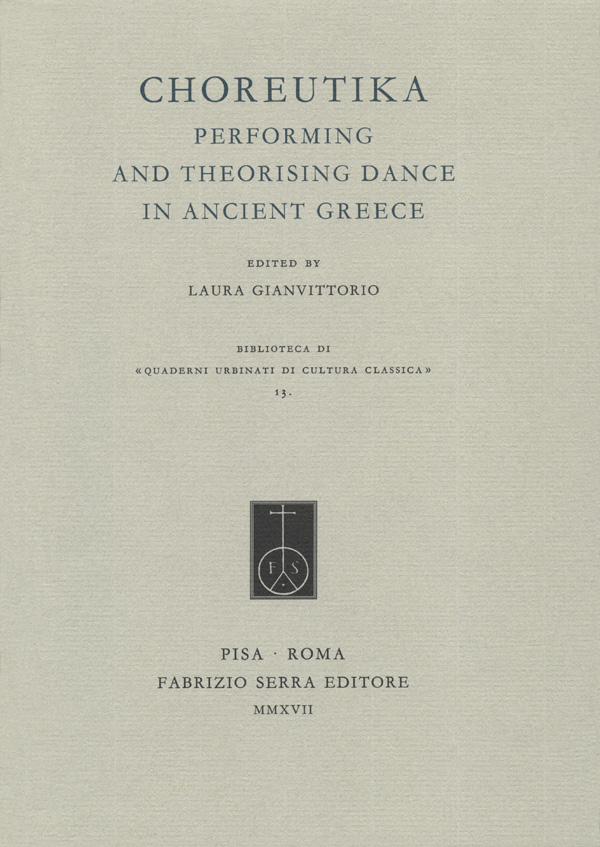 Famously defined as a “song and dance culture”[1], archaic and classical Greece is unanimously recognized as a culture where dance held a position of central importance on a civic, ritual, artistic, and pedagogical level. Considering such felicitous premises, it is quite disappointing to remark how scarcely Greek dance has been actually investigated. Against this tendency, the present volume aims at providing fresh insights into dance as one essential component of Greek performance arts − such as theatre, choral poetry, and music − and as a topic of ancient theoretical speculation.

Although the serious methodological fallacies of previous approaches to ancient dance and the need for further research have been assessed already twenty years ago[2], Classical studies still display a tacitly accepted habit to neglect dance. Claims about the chief role played by dance are frequent, but generic, and often fail to generate specific questions to be explored, wallowing in the mire of scholarly common places. Not even the so-called performative turn, which shifted the general attention from text to performance in many disciplines within the Arts and Humanities, provided much help: while ancient music, poetry, and theatre performance have won the attention they deserve, ancient dance has been very much left behind.

It is both wise and realistic to acknowledge that, when it comes to ancient dance, little can be ascertained in absolute terms, and in particular that we cannot plausibly (i.e. verifiably) determine how dance performances looked like or how lost choreographies were danced, as Frederick Naerebout explains in his chapter. So what can studies of ancient dance actually achieve? Just to mention a few examples, they can give historical, political, religious, aesthetic, and philosophical account of the role and meaning of dance in ancient Greece, thus helping us understand its “song and dance culture”. They can provide practitioners such as choreographs, theatre directors, and dancers with reliable knowledge of ancient Greek dance within projects centred on so-called HIP, i.e. historically informed performance (one might think of the astonishing re-performances of Greek plays by Ariana Mnouchkine or by Yana Zarifi-Sistovari). Moreover, they can recover and analyse dance-related evidence and match such evidence with that provided by enquiries on ancient theatre, choral poetry, Greek music, aesthetics, and poetics, thus adding precious new pieces to the (lost) picture of several Greek performance arts.

The most recent research outcomes on Greek dance can be summarised as follows. Apart from a few exceptions[3], twentieth-century studies pay little attention to dance, even those concerned with chorus and choral poetry. Instead, two different research trends prove to be most productive on their own, though their dance-related potential generally remains unexploited: on the one hand, there are studies indebted to anthropological and ritual research, along the path showed by Claude Calame’s pioneer work on Alcman[4]; on the other, inspiration comes from the oral theories and from their application to Greek choral poetry, especially under the influence of Bruno Gentili and of the Scuola Urbinate[5]. Less text-centred studies, such as those influenced by modern literary theories (ranging from the German Idealism to Bertolt Brecht’s epic theatre), tend to focus on the nature and meaning of the “collective body” and look at it from a religious, philosophical or political perspective, rather than from a choreographic and theatrical standpoint. This leads to highly sophisticated theories about “the Greek Chorus” seen as some kind of abstract and often vague concept, but does not help much in understanding choruses as dancing groups and in enlightening any aspect of their performances. Investigations on chorus and chorality have multiplied and almost boomed in the twenty-first-century[6], but the issue of dance still tends to be neglected[7]. Recent enquiries have analysed the problematic role of the chorus in modern theatre and drama theory[8] as well as in re-performances of ancient drama[9], even surveying the Rezeptionsgeschichte of the would-be “ancient dances” recreated by modern choreographers[10]. Furthermore, as a consequence of the renewed interest in non-canonical theatre, considerable attention has been paid to pantomime, a genre especially popular during the Roman period, consisting of dumb shows by one single performer who, through body and hand schemata, impersonates different characters[11]. Far less light, however, has been shed on other dance genres.

While considering this research background, the focus of Choreutika is, on the one hand, on Greek dance seen as an essential component of choric and theatre performance and, on the other, on ancient concepts and notions regarding dance. In particular, within this field of investigation, it is the archaic and classical age from the seventh until the end of the fourth century B.C. that earned our attention. In this period, choral and dramatic poems are usually danced by the choruses. Poetry, music, and dance interplay closely with each other, building those inter-medial performance arts to which the Greeks referred through terms that are rather difficult to translate into modern languages, such as mousike, molpe, and choreia. Unfortunately, once living memories of such ephemeral arts are lost, texts are virtually all that remains. For this reason, the poetic texts that accompanied dance performances − often explicitly introducing, praising, and commenting on them − can be regarded as a key resource to understand the meanings, contexts, and functions of archaic and classical dance. In addition to this, we shall consider those philosophical and theoretical texts (mostly written by Plato, Aristotle, and Aristoxenus) that reflect on poetry and music and that are therefore concerned more or less explicitly with dance as well.

The volume consists of two parts. The first, Performing Choral Dance: Texts and Contexts, reconsiders Greek poetry from the perspective of dance and examines a sample of authors and works whose performance relied on dance: namely the (choral) poetry of Stesichorus and the choral songs of Aeschylus and Euripides. The second part of the volume, Elements of Ancient Dance Theory, offers a selection of ancient theoretical approaches to dance. Here, the label “ancient dance theory” is not intended to suggest that the Greeks had developed a homogeneous system or a shared body of knowledge about dance. The expression refers to what must have been, at the very least, a significant quantity of thoughts, technical terms, and notions that, though not necessarily referring to one another in an explicit fashion and in spite of being disseminated within theories of mousike and choreia, were nonetheless all concerned with dance. As a matter of fact, dance was a topic of serious investigation both for the most successful dance practitioners and for the most brilliant theorists: just to mention the best known examples on each side, one might think of Sophocles’ lost treatise On the Chorus and of Plato’s Laws[12].

Together, the papers collected in Choreutika enhance our knowledge of the strong ties dating from the archaic until the end of the classical age that bound dance to such diverse domains as religion, choral poetry, theatre, poetics, music, philosophy, and aesthetics. In so doing, they shed light on the two sides of Greek dance, presenting it not only as a fascinating performance art but also as a topic of ancient theoretical investigation. Ultimately, it is the synergy of such different approaches that helps us today to grasp the vibrant complexity of ancient Greek dance.

2. Moving in Unison. The Greek Chorus in Performance (Frederick G. Naerebout)
3. Dancing with Stesichorus (Patrick J. Finglass)
4. A Dance of Death. Evidence about a Tragic Dance of Mourning (Laura Gianvittorio)
5. Imagining the Shape of Choral Dance and Inventing the Cultic in Euripides’ Later Tragedies (Eric Csapo)

[12] Our volume will not, however, pick out Plato’s Laws as a central topic. Dance-related aspects of this Platonic dialogue have been recently and thoroughly discussed in Peponi 2013 (here see especially Chapter Two).

This book presentation, which is based on the first part of the introduction of the volume (published by Fabrizio Serra Editore), is to say which kind of research void Choreutika tries to fill and to outline its main issues and goals.