B. Baert, Fragments. Studies in Iconology. A presentation 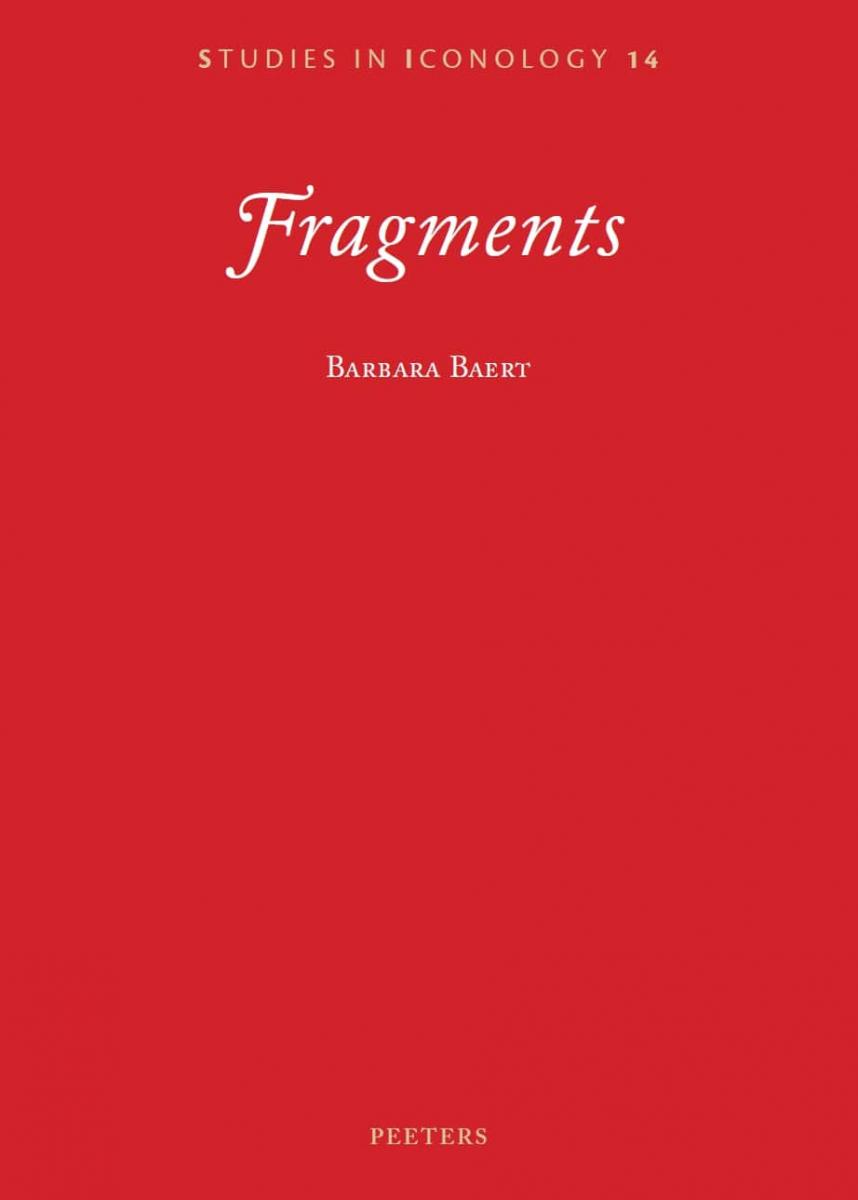 Fragments is a celebratory work, compiled especially for “The Right Moment: A Symposium on Kairotic Energies” (18-19 October 2018, Brussels) organized by Barbara Baert in collaboration with the Francqui Foundation, and published within the “Studies in Iconology” series.

Fragments and the symposium are Baert’s response to her being awarded the Francqui Prize Human Sciences, the highest and most prestigious scholarly and scientific award in Belgium, in 2016. The jury rapport of the Francqui Prize states on its laureate:

Professor Baert’s truly innovative approach to the iconology of Mediaeval Art, which has placed into the foreground the senses, materiality, and various aspects of the female and male body, and iconographic themes that have been neglected in the past, has deeply transformed the way European religious and secular art of the Middle Ages is viewed.

Since 1933, the Francqui Prize has been granted almost every year, successively in the fields of exact sciences, humanities, and biological and medical sciences. Being awarded also comes with the great honour of organizing one’s own celebratory symposium. Therefore, Baert envisioned Fragments and “The Right Moment: A Symposium on Kairotic Energies” as tokens of her gratitude and sings of encouragement towards the desire of a deeper understanding of our artistic environments. 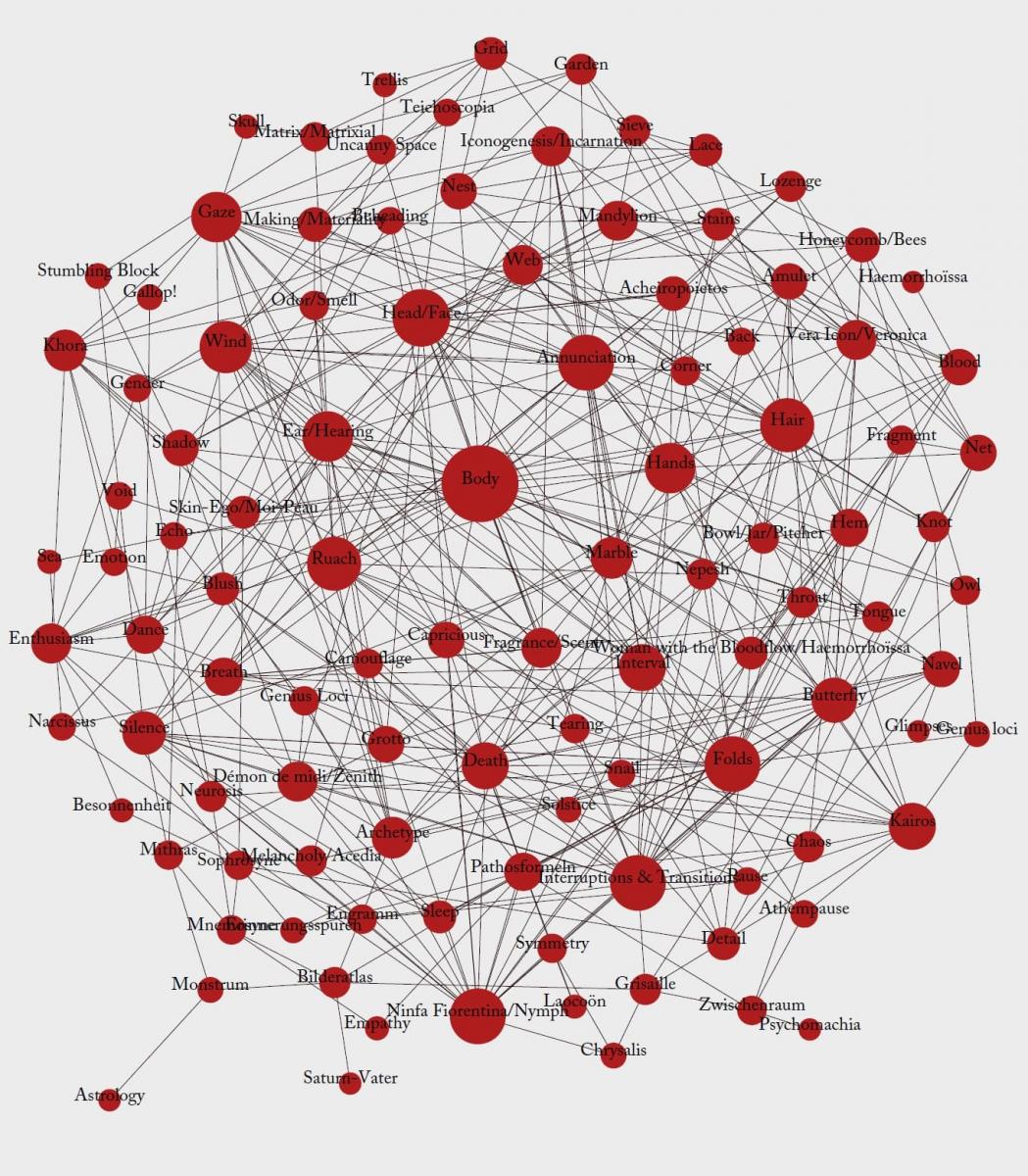 2 | Visualization of the network of all lemmata.

Fragments is loosely conceptualized as a ‘glossary’. The volume consists of hundred-and-ten lemmata, from Acheiropoietos to Zwischenraum. Each lemma presents an encompassing explanation, a shorter experimental or even a poetic musing in order to circumscribe concepts and terms that frequently occur in the field of iconology, and Baert’s research specifically.

Moreover, Fragments offers a unique anthology of her work as it is compiled entirely out of her writings. Images of one or several iconic artefacts are paired with most of the lemmata, they invite the readers to embrace the beauty of these artefacts, the multiple disciplines and genres that are continuously crossing each other not only in Fragments, but also in the humanities and art. Cross-referencing arrows, that are found throughout all lemmata, conveniently accompany us from one lemma to many others. They are intended to guide the readers through, and even deeper into, Baert’s ever-expanding microcosm.

The web is spun on the air/breath and it sways in the wind.
Even a gale cannot easily destroy it due to its exceptional elasticity.
However fragile the web may seem, it is, in principle, an indestructible artefact.
The web is made up of intersections, where strength is concentrated.
(Quoted from the lemma on ‘Web’).

This web visualizes the wiring of Fragments by revealing the intersections of the hundred-and-ten lemmata. It showcases the ‘knots’ that tie all of Baert’s fragments together, and when a lemma reoccurs more often its ‘knot’ thickens. It turned out that ‘Body’ was mentioned most frequently. Besides giving a general overview of Fragments contents, this web also visualizes the key concepts in Baert’s body of work.

Fragments appeared as a celebratory volume in the peer-reviewed “Studies in Iconology” series, published at Peeters Publishers, of which Baert is the founder and editor-in-chief. Generally, this series accepts interdisciplinary contributions that deepen the understanding of the visual medium, alongside the history of mankind, by combining insights from art history, cultural anthropology, philosophy and theology. The volumes are original, thought evoking and often somewhat daring or experimental, and therefore truly reflect Barbara Baert’s spirit.

The volume Fragments by Barbara Baert presents one hundred and ten entries – from Acheiropoieton to Zwischenraum – that explore new insights and observations for research and criticism in art history, iconology and cultural anthropology. Each lemma bears the stamp of the author’s personality and work, sometimes in the form of an encompassing explanation, sometimes a brief experimental musing, illustrated by iconic artefacts. Fragments appeared as a celebratory volume in the peer-reviewed “Studies in Iconology” series, published at Peeters Publishers, of which Baert is the founder and editor-in-chief. The editorial series now includes fifteen volumes characterized by an interdisciplinary methodological approach aimed at deepening the understanding of the visual medium, alongside the history of mankind.