On the Continued Relevance of Peter Behrens 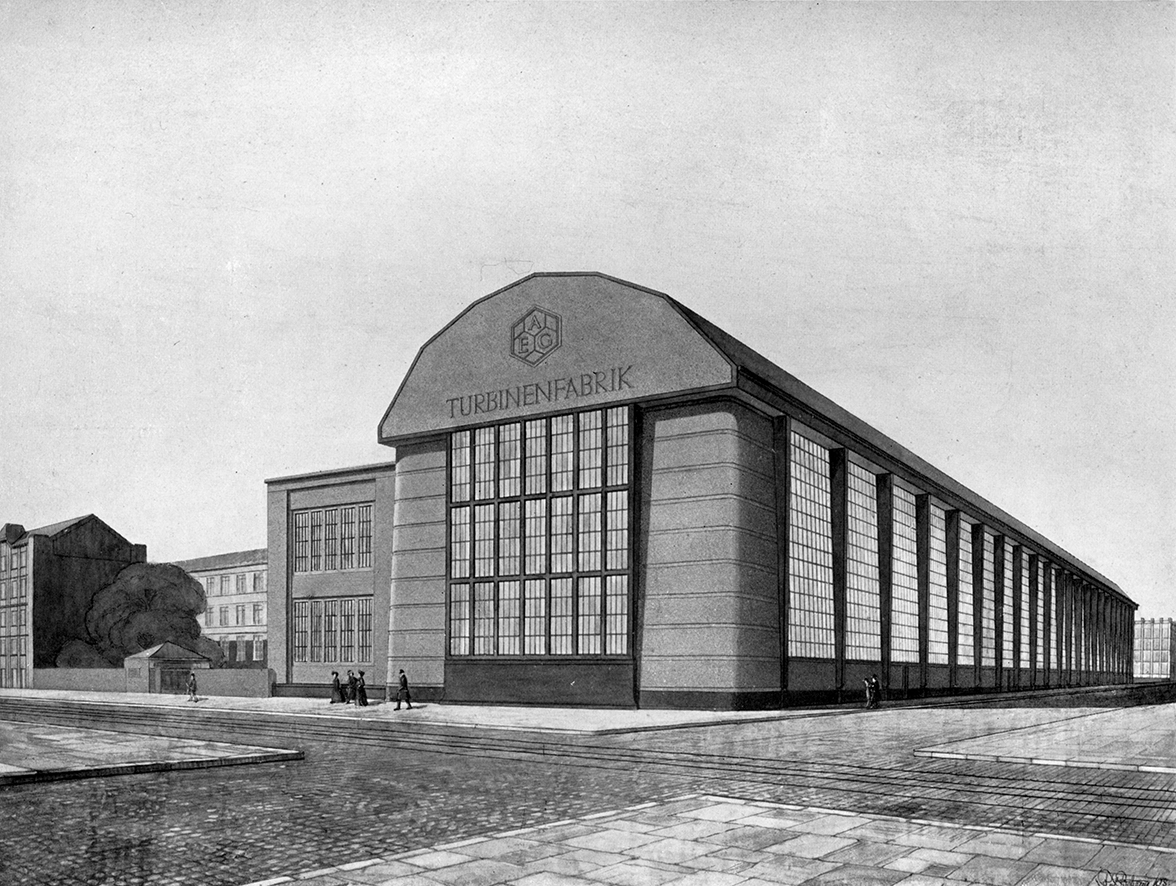 Though not an expert on Peter Behrens, as an architect, I am interested in reflecting on his continued relevance and wonder why, even today, 150 years after his birth, we continue to be interested, not only in his works, but in the model of artist and intellectual his figure poses. What can we learn from Behrens today?

In my teaching of architectural design, I emphasize the way that architects learn from each other in their projects and buildings. I began to reflect systematically on this process of learning during my teaching years at the Graz University of Technology (TU Graz, 1997-2002), where I was responsible, as Professor für Baukunst (Professor of Architectural History and Theory), for both teaching history of architecture and for leading design studios. The study plan for students required that, in the first year, I gave lectures dedicated to both ancient history, from Egyptian to Greco-Roman, and to modern and contemporary history, from Filippo Brunelleschi to Le Corbusier. It was, as one can imagine, a challenge to select topics. Fortunately Karin Wilhelm, an excellent art historian and expert on the historical avant-gardes and the Bauhaus, was teaching in Graz at the same time, and had dedicated her teaching to the general cultural contexts in which the main currents of architectural modernity had developed. My teaching could therefore be complementary to hers and I decided to associate my lectures on the historiographical reading of a series of “famous buildings” (the so-called “masterpieces”) with the interpretations elaborated by contemporary architects. In this way, I intended to instill passion for the study of history in Graz students, illustrating, for example, how Le Corbusier had studied the domus of Pompeii as a reference for his own theories of modern space explained in Vers une architecture (Towards an Architecture, 1923), or how Louis Kahn was inspired by his observations of the Albi Cathedral, transcribed in memorable sketches.

In this context, the figure of Behrens appeared only once, with the AEG Turbine Factory (Berlin, 1909) which I analyzed as a canonical interpretation of a modern “temple of industry”. Asked why Behrens would have wanted to connote the factory with the sacred image of a temple, my colleague Karin Wilhelm helped students respond by teaching them Berlin’s cultural-political context and the internal debates within the Deutscher Werkbund. My lecture was instead focused on how Behrens managed to obtain an original architectural form capable of evoking a temple without renouncing the need for functionality and constructive rationality in a modern industrial building. My priority was to make students aware of Behrens’ design strategy: which compositional procedures can create a sensation of mass and powerful corporeality in a steel and iron building? It is well known that Behrens attributes a decisive role to the ‘heavy’ reclined corner in masonry, one which has no supporting function and is therefore a ‘fake’ in terms of constructive rationality: this ‘forgery’ was nonetheless necessary to obtain the characteristic image of strength for which the building is known.

Following the crisis of modernity that emerged with the Second World War, in 1940 the Swiss critic Peter Meyer, editor of Das Werk magazine, violently attacked the artistic expression of the Turbine Factory:

In its time the Turbine Factory of the AEG was felt to be epoch-making: one saw in it the epitome of a modern functional architecture of the Machine Age. Today, with our fingers burned, we have sharper ears for slogans; we feel the false pathos of the ponderous Egyptian-like stylization even in the apparent ‘simplicity’ of this machine shop. Or, more specifically: it is genuine pathos in the wrong place, sacred glorification of the machine; that is, idolatry (Meyer 1940, 163, as quoted in Anderson 2000, 28).

Anderson’s conclusion is that Behrens was more concerned with “glorification of the machine” than with “frank industrial architecture,” or as he writes:

His concern was rather with elevating so dominant a societal force as the factory to the level of established cultural standards. What makes his work interesting and important, independent of the quality of the actual achievement, is that he understood that the established cultural standards must be transformed in the process of assimilating modern industry (Anderson 2000, 28).

Reflecting on the continued relevance of Behrens means reflecting on the particular kind of modernity his approach proposed, one that was not that of a radical pioneer. There are many buildings, made in the same years as Behrens’ projects, that appear more radically modern whether in the use of new materials such as concrete and glass, in the affirmation of a new abstract language, in typological and distributive innovation, or in experimentation with new design methodologies. For example, when compared to Behrens’ Turbine Factory, the Fagus Factory (1911) by Walter Gropius and Adolf Meyer affirms values of elegant lightness thanks to its hollowed-out, fully glazed corner. Behrens’ Mannesmann administrative building in Düsseldorf (1910-12) is interesting for the rigorous and rational organization of its offices according to a strict modular logic, but it appears traditional if compared with the innovative work spaces of Frank Lloyd Wright’s Larkin Building (1903-1905). Similarly, Behrens’ apartment house in the Weissenhofsiedlung (Weissenhof Estate) in Stuttgart (1927) pales as a case of typological innovation when compared with the revolutionary flexible plans proposed by Le Corbusier and Mies van der Rohe.

Rather than focusing us on radical innovation, the modernity of Behrens that most interests us today places the issues of form and space at the center of our attention. Several recent critical studies have been dedicated to this observation, in particular, a series of essays collected in the book Peter Behrens, Maestro di Maestri (Peter Behrens: Master of Masters, 2011). In “La giusta forma,” Silvia Malcovati proposes an interesting cross-reading of some theoretical texts by Behrens with some of the formal principles used in his architectural work. Behrens’ attention to the question of form seems to refer to the contemporary studies of Erwin Panofsky, Henri Focillon or George Kubler, though in reality, as Malcovati points out: “Behrens non conosceva [questi studi] in termini scientifici […] ma di fatto [li] praticava apertamente” (Malcovati 2011, 77; “Behrens did not know [these studies] in scientific terms [...] but as a matter of fact practiced [them] openly”). It is possible to recognize a clear evolution of Behrens’ research on form, which Malcovati interprets as:

a transition from plane geometry to a three-dimensional one, from the problem of the cladding to the construction of architectural space, from the question of the building to that of its relationship with the urban space (Malcovati 2011, 81).

This interesting interpretation is further developed by Hartmut Frank in his essay “Dal piano allo spazio,” which opens with a quote by Fritz Hoeber: “Architecture is the rhythmic incarnation of the spirit of the time. Architecture is the sensory philosophy of space” (Hoeber 1913). These two sentences were used by Hoeber as a motto at the beginning of his study dedicated to Peter Behrens in 1913. Frank convincingly demonstrates how Hoeber’s monograph decisively marked a shift in Behrens’ position:

From a visual artist, who works in two dimensions, to an “artist of space” [...] to an architect and creator of form, who opened up to the third dimension and in this sense designs architectural volumes and interior spaces, furniture, household tools and industrial products, as well as parks and urban ensembles (Frank 2011, 132).

Indeed, Behrens is remembered as one of the first industrial designers, able to design on all scales, dedicated to ‘giving shape’ (gestalten, in German) to objects and spaces. In this focus on the role of ‘creator of form,’ Behrens is far from any messianic or revolutionary role: he does not commit to new programs, to new contents, or to new lifestyles. He offers the image of an artist who deliberately limits the scope of his action. Is such a figure of an architect reducing his role to questions of form and space still a relevant one?

The question of the lesson of Behrens returns presenting itself in terms different to when Gropius, Mies and Charles-Edouard Jeanneret (the future Le Corbusier) were his direct collaborators in the atelier of Neubabelsberg. In various testimonies, all three architects expressed their great admiration for Behrens as a master, while also acknowledging he was a ‘hateful’ person (quoted in Anderson 2011, Cohen 2011, Neumeyer 2011). The young Le Corbusier called him “the bear Behrens” (Cohen 2011), describing him in a letter to his parents as:

A giant, large stature. Terrible autocrat, regime of terrorism. Demonstrations of brutality. All in all, a type. Which I admire, moreover. My masochism is exalted to undergo the bite, when the boss has this stature (Letter dated November 11, 1910, as quoted in Cohen 2011, 110).

In another letter to his parents dated several weeks later, Le Corbusier highlights his profound frustration: “Avevo sperato in un contatto frequente e fecondo con Behrens. Ma questo uomo è un orso malato perché scorbutico, collerico senza ragione, ed è così dalla mattina alla sera”(“I had hoped for frequent and fruitful contact with Behrens. But this man is a sick bear because he is grumpy, angry with no reason, and he is like this from morning to night”, letter dated November 25, 1910 as quoted in Cohen 2011, 111). In a 1961 interview with Peter Carter given many years after his collaboration with Behrens, Mies van der Rohe acknowledged that he owed the ‘master’ his way of conceiving “sense of form”: “Peter Behrens aveva un formidabile senso della forma. Era il suo più importante interesse, e da lui ho imparato a conoscere e capire questo senso della forma” (“Peter Behrens had a formidable sense of form. It was his most important interest, and from him I learned to know and understand this sense of form”, Carter 1961, 240, as quoted in Neumeyer 2011, 124).

In an insightful essay written in 1960, Vittorio Gregotti already asked himself the question:

What do we promise ourselves from our research (which lesson for today, I mean) when we study a figure like Behrens trying to bring to light all the aspects, even the least coherent, even the most contradictory? (Gregotti 1960, 8).

Taking an interest in “all the aspects” of Behrens is, in fact, a fundamental key to understanding his continued relevance and legacy. As a ‘total artist,’ Behrens demonstrated the unique ability to work as a painter, graphic designer, typographer, architect, industrial designer, but also as an urban planner and landscape architect. Faced with the dramatic and urgent issues concerning the survival of the planet, architects and designers today are called to act in radically changed conditions: does it make sense to cite Behrens as a possible model?

It is less the model of the “total artist” capable of practising a multi-faceted activity in isolation, that is important to contemporary architecture. It is instead the lesson of a multidisciplinary and open approach to “giving shape” that can be useful to us today at a moment when we are no longer tied to the figure of the individual author, but are instead focused on the creative engine of group work and collective action.

Does it make sense to cite Behrens as a possible model, today? What can we learn from him? Through the analysis of past and recent interpretations of his work in all its aspects, from Pevsner to Richards, from Giedion and Hitchcock to Meyer, from Gregotti to Cohen, Anderson, Frank and Malcovati, this essay aims at focusing on Behrens' relationship with issues like Modernity, Form, Shape and suggests that the lesson of a multidisciplinary approach to "giving shape" is the most useful one in an age, like ours, of group work and collective action.