A Review by Salvatore Settis* 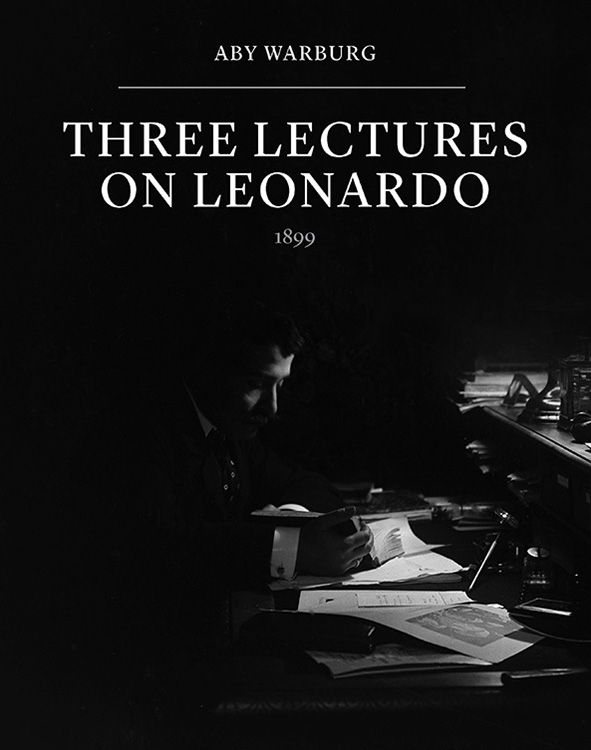 Aby Warburg, Three Lectures on Leonardo. 1899, with foreword by B. Sherman and introduction by E. Marchand, translation from German by J. Spooner, with the collaboration of C. Wedepohl, The Warburg Institute, London 2019.

“I remember a lecture given by Aby Warburg: he spoke for two hours about a postage stamp, and all the verbs came in the last half an hour”. This was how a granddaughter of the great historian of culture and art (1866-1929), who had attended one of his lectures in Hamburg as a child, put it. It is a credible anecdote, because it not only alludes to Warburg's impervious German, but also has a seal of authenticity in the mention of the stamp. The one referenced would almost certainly have been that of Barbados (then a British colony) portraying King George V in the guise of Neptune, just as his predecessor Charles II had modelled himself on the Graeco-Roman god and Virgil for a seal in 1662. It amounts to one of those micro-maps of European social memory that Warburg, pursuing iconographic formulas like the one mentioned above, would have included in his Mnemosyne Atlas.

“A Jew by blood, a native of Hamburg, a Florentine at heart” Warburg described himself. He published little during his lifetime; the collection of his writings came out just as the advent of Nazism (1933) forced to relocate his famous Library to England. His collaborators, Fritz Saxl and Gertrud Bing, ensured that the Warburg Institute was incorporated into the University of London, but failed to bring Warburg's many unpublished works into print, not even the unfinished Mnemosyne. Despite the fame of the Institute that bears his name, Warburg remained little read for many years (partly because of the complexity of his writing, which was full of implicit quotations from Goethe, Kleist and Nietzsche...).

His renaissance began in Italy, with the partial translation of his writings promoted by Delio Cantimori (1966), and continued with Ernst Gombrich’s Intellectual Biography (1970, published in Italian by Feltrinelli in 1983). This was a book written “with little intellectual sympathy for the subject of the biography [Warburg], but which, counter to Gombrich’s intentions, triggered a veritable renaissance of Warburg, which continues to this day”. As for Mnemosyne, the panels of the Atlas were dismantled, but then reconstructed first for an exhibition in Vienna (1993) and then in several rival editions; the Atlas is accessible in a digital version on Engramma, and in an edition published by Aragno curated by Maurizio Ghelardi (2002). A new and more accurate reconstruction had been on display in Berlin (Haus der Kulturen der Welt) from 4 September 2020: it is a “Mnemosyne for the 21st century”, as Berndt Scherer has stated in the magnificent facsimile (Hatje Cantz, 2020; on the exhibition in Berlin, see an interview with Roberto Ohrt, in Engramma 176).

Warburg, however, is not solely the author of elitist writings in which language pursues the development of thought condensing it into highly potent expressions difficult to decipher (such as Pathosformel, ‘formula of pathos’). He also sought to communicate with a broader and more diverse public, and in 1901 he was one of the founders of the Volksheim (‘People’s House’) in Hamburg, which offered lectures, literature courses and art exhibitions to working people. The Three Lectures on Leonardo, which he delivered to over 400 people on 18, 20 and 22 September 1899 at the Johanneum in Hamburg – the Grammar school where he had studied – were born out of this intention. It is Warburg’s second text translated into English by the Warburg Institute: the first was the famous lecture on the Hopi Serpent Ritual, delivered in 1939, while the “Blue Book” containing the English translation of his writings was published in 1999 in Los Angeles by the Getty Research Institute. As Bill Sherman, the Director of the Warburg Institute, writes, this preliminary edition of the Lectures on Leonardo celebrates three anniversaries at once: the 500th of Leonardo's death, the 120th of the lectures, and the 75th of the inclusion of the Warburg Institute in the University of London (1944). The original German text of these lectures will soon be published by Claudia Wedepohl and Eckart Marchand.

The monographic slant of these pages is unusual for Warburg. They cover Leonardo's career from his apprenticeship with Verrocchio to his death in France, often with parallels that were already common at the time, as when his Last Supper in Milan was juxtaposed, by way of contrast, with earlier Florentine works (in San Marco, Sant'Apollonia); or, as in the Battle of Anghiari, for which an ancient cameo showing the Fall of Phaeton was recognised by Eugène Müntz as the source of the motif of the horses biting each other. And, to capture the public's attention, there was also an allusion to a painting by the Suhr brothers, back then on display in Hamburg (1820-1842), in which Leonardo’s Belle Ferronière was portrayed sitting at a café table.

Yet in such a conventional setting one can often sense the roar of the lion. At the time (1897-1902), Warburg was living in Florence, and had published an important study on Botticelli’s Primavera and Birth of Venus in 1893. It was then that one of his leading ideas began to shape: that of the representation of movement in the early Florentine Renaissance, which was inspired by a classical figure he called the Nymph, a young girl with hair and clothes blowing in the wind just like the handmaid who hastily enters the scene of Ghirlandaio’s Birth of St. John the Baptist in Santa Maria Novella. This Nymph, as well as those of Leonardo, often features in the Three Lessons; Warburg’s Hamburg audience could not have known that while in Florence, he had been writing an epistolary novel (left unfinished) together with his Dutch friend, André Jolles, in which Ghirlandaio’s Nymph appeared as if alive...In these lectures on Leonardo, Warburg stressed the anti-classical significance of his Nymph:

Observing the influence of Antiquity in motifs of heightened outward movement is not readily intelligible for us, as we have been accustomed since Winkelmann to admire precisely only the ‘repose and quiet grandeur’ of Antiquity. Indeed, the Early Renaissance […] then was not (as it is for us) a didactic plaster cast collection, in which Antiquity has retained a pale afterlife; it was rather a past celebrating its living Renaissance in the real-life figures of life that moved to a festive rhythm.

With such incisive words Warburg mocks the “quiet grandeur of the plaster casts”, contrasting it with the chariots with mythological characters seen in images of Florentine festivals, “popular vehicles (literally) that embodied a living and immediately present Antiquity and gave it life in the eyes of the public”.

As early as 1899, Warburg was already building the fabric of elective affinities that would animate the Mnemosyne panels. One example will suffice: in the first lecture, Warburg mentions two blocks of images that delineate the formation of the young Leonardo. To one side are angels (The Baptism of Christ by Verrocchio, and Three Archangels with Tobias by Francesco Botticini), and to the other two Verrocchio-style decapitations (David with the Head of Goliath and The Beheading of St. John the Baptist). Thirty years later, this would be the very structure of Panel 47 of Mnemosyne: Botticini’s Archangels in the centre, and then angel-Nymphs on one side, “headhunters” (Judith and Salome) on the other (see in Engramma, Mnemosyne Atlas Panel 47, Images and Readings). Mnemosyne was yet to come, but its antecedents were in the process of being formed.

In the second lecture, Warburg writes that Leonardo once “had mastered […] the vocabulary and grammar of this new language, he then sought to express himself in a condensed and succinct manner”. These lines are, perhaps, unconsciously autobiographical: the thirty-year-old Warburg who wrote them sought to launch his theories both in the (reluctant) world of specialists and to a wider public; he needed words to address them both but he prepared to condense their substance by intensifying through language their programmatic power as well as their prophetic force.

*An Italian version of this review had already been published as Leonardo secondo Warburg in “Il Sole-24 Ore” (August 9, 2020), X.

Salvatore Settis presents Three Lectures on Leonardo. 1899, a collection of lessons delivered by Aby Warburg in 1899 at the Johanneum in Hamburg. This text, edited by Bill Sherman in 2019, is Warburg’s second text translated into English by the Warburg Institute. In his review, Settis underlines the unusual monographic reading that Warburg uses in describing the life of Leonardo, and expands towards a brief history of Warburgian theories.