Milcho Manchevski
Before the rain
interview by Cinzia Dal Maso 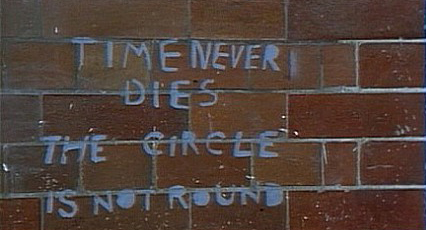 cinzia dal maso - What is your attitude towards the name issue?

milcho manchevski - The name issue looks like a complex issue, but it boils down to an absurd excuse for an end-game of ethnic cleansing. It is absurdity brought to an extreme. How would you feel if someone came to you and told you that you had to change your name because he or she didn’t approve of your name? What cheek, what balls! At first you’d laugh at it, but 20 years later it will start eating at your insides.  Especially when this attitude expressed by your neighbour has serious practical consequences (such as slowing down or blocking your country from access to processes that stimulate economic prosperity and system reforms, and imposing crippling illegal blockades and embargoes). This is only in addition to creating toxic atmosphere in the region which is going through a deadly war. This is particularly troublesome when you realize that this someone has absolutely no problem with their preposterous, arrogant and aggressive demand, but also when you realize that the hypocrisy of political Europe is more interested in solving their bureaucratic problem than in justice, human rights (such as the right to self-determination) or even peace and stability. Euro-bureaucrats keep lecturing Macedonia on your behalf, telling us to, basically, change the name of our country, the name of our language and the name of our nation. This, as you could imagine, is offensive and insulting, especially for a small nation and people with troubled history and fragile collective ego. This is a real issue with most Macedonians, a deeply heart-felt emotional problem that has to do with the personal and collective dignity, and as such, could have unforeseen consequences.

As a footnote, allow me to tell you what happened the first time I came to Venice. I was presenting my film Before the Rain at the Mostra del Cinema in 1994. The first day, I was summoned to the offices of the Festival. I was told that there was a diplomatic “issue”. Namely, the Greek embassy in Italy has complained to the Festival, demanding that they remove the name “Macedonian” when describing the name of the language spoken in my film. The Greek embassy had claimed that such language did not exist. I asked the very nice lady representing the Festival whether I looked like a character from a cartoon. One that does not exist. We both laughed and concluded the matter then and there.

For those interested in the history of the name conflict, I have to mention that Macedonia changed both its constitution (to explicitly state in its constitution that Macedonia is not seeking anyone else’s territory - as if the country the size of Central Park could demand anything) - AND its flag (to remove a symbol that Greece claimed as her own, in spite of the fact that this symbol has been found in archaeological sites in Macedonia as well as in Greece). What has derogatorily been called “antiquisation” should be seen in this context.

c. d.m. - Do you think antiquisation is a purely political issue, or it is also extensively supported by Macedonian citizens? Do Macedonians really feel they are descendants of Alexander?

m. m. - Some do and some don’t. I was not around when Alexander roamed the earth, nor do I pretend to be an expert in history. Yet, his father built cities where today is the Republic of Macedonia, there is material evidence of this civilization in the Republic of Macedonia, and some of Alexander’s people did come from here. When the empire collapsed these people did not vanish into thin air. So, if people today feel that they want to celebrate, cherish and preserve the memory of those Macedonians - in addition to the memory of other cultures that left their trace here - I don’t see why anyone would find that objectionable. Unless, of course, if that someone had an issue with their own identity. Or, if that someone was using this pseudo-historical argument as a proxy in a more complex political battle, such as the completion of the ethnic cleansing of southern Macedonia, for example, the one started at the beginning of the 20th Century and carried out through most of it.

As far as the claim that the “antiquisation” is new, there are written records that people living in these parts, ethnic Macedonians speaking the modern Macedonian language (which is of the Slavic family of languages) have claimed Alexander as their forefather since the 19th century (see Georgija Pulevski’s Dictionary of 1875, for example), while at least 14 Greek intellectuals of the same period (1794-1841) insisted that the Ancient Macedonians were not a part of the Hellenic world and would be considered occupiers of ancient Greece.

c. d.m. - What about those (the current political opposition) who insist on the Slavic heritage of Macedonia? Is it true they are an élite, while the majority of the population is crazy for Alexander?

m. m. - The divide of Slavic vs. Alexander’s Macedonians has more to do with political power-struggles than with the way most people in Macedonia today feel. Why would the Slavic heritage exclude the heritage of ancient Macedonia? Do you exclude the Etruscans as your forebears? Are we now going to look into every individual’s Dna to determine people’s ancestors? Different cultures lived or passed through what today is the Republic of Macedonia, and people have the right to study and cherish their past - as long as it does not affect their future. 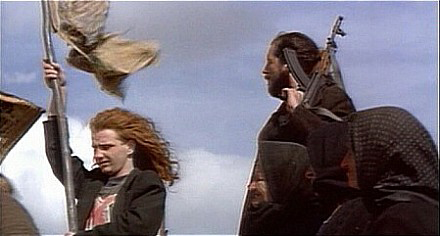 m. m. - Yes, what you describe is probably true. The interest in Alexander the Great in the Republic of Macedonia was not as extensive before the Greek insults of the last 20 years. The Greek destructive politics, aggressive chauvinism and hysteria did contribute to a solidifying of the Macedonian sense of pride and even nationalism.

The sense of national belonging and pride changes with time everywhere, and in contemporary Macedonia we are witnessing sweeping developments in that respect. But, these should not be confused with the justified sense of indignation that most Macedonians feel at the prolonged insult they have been dealt by Greece and - by extension - by the European Union. It is terribly sad to see this aggression perpetrated in the heart of self-satisfied Europe, the one that prides itself on the principles of justice, equality and human rights, and moreover perpetrated by the proverbial cradle of the Western civilization, Greece. People in Macedonia are disappointed by the treatment they are receiving from Europe and the international community: the EU ignored its own findings (by the Badinter Commission) and did not recognize Macedonia for a long time in spite of the fact that it fulfilled the criteria for diplomatic recognition; Greece imposed a unilateral embargo against Macedonia for several years (and the landlocked country could not bring most of its imports in); the EU stood by as the basic human rights to self-determination were being violated in Greece (the only country in Europe claiming not to have any minorities); there was no mercy when the Macedonian meagre economy was brought down to its knees by the UN embargo against Serbia (where Macedonia did most of its trade before the wars of the 1990’s); Macedonia was shamelessly used as NATO’s backyard for its single war in Europe (the one against Serbia) and forced to put up with the influx of more than 300,000 refugees (an addition of roughly 15% of the population of the country) from Kosovo as the world stood by and lectured us on how to deal with the crisis while no one took on a substantial number of these refugees (the French took only Catholics and parts of families, leaving the mothers behind); then, when the guerrillas trained in NATO’s war in Kosovo turned on Macedonia, the world took pictures and pretended it was not a war for territory but for human rights; then that same NATO caved in to the Greek veto over Macedonia’s ascension to a member status even after Macedonia had been used as a driveway for NATO’s very own war against Serbia…

The Macedonian people have no problems understanding the Greek state and its politicians: they have been next door for centuries now. But the people here are disappointed by the recent rediscovery of European hypocrisy, the one that is blasé while observing first ethnic cleansing, then cultural and linguistic cleansing.