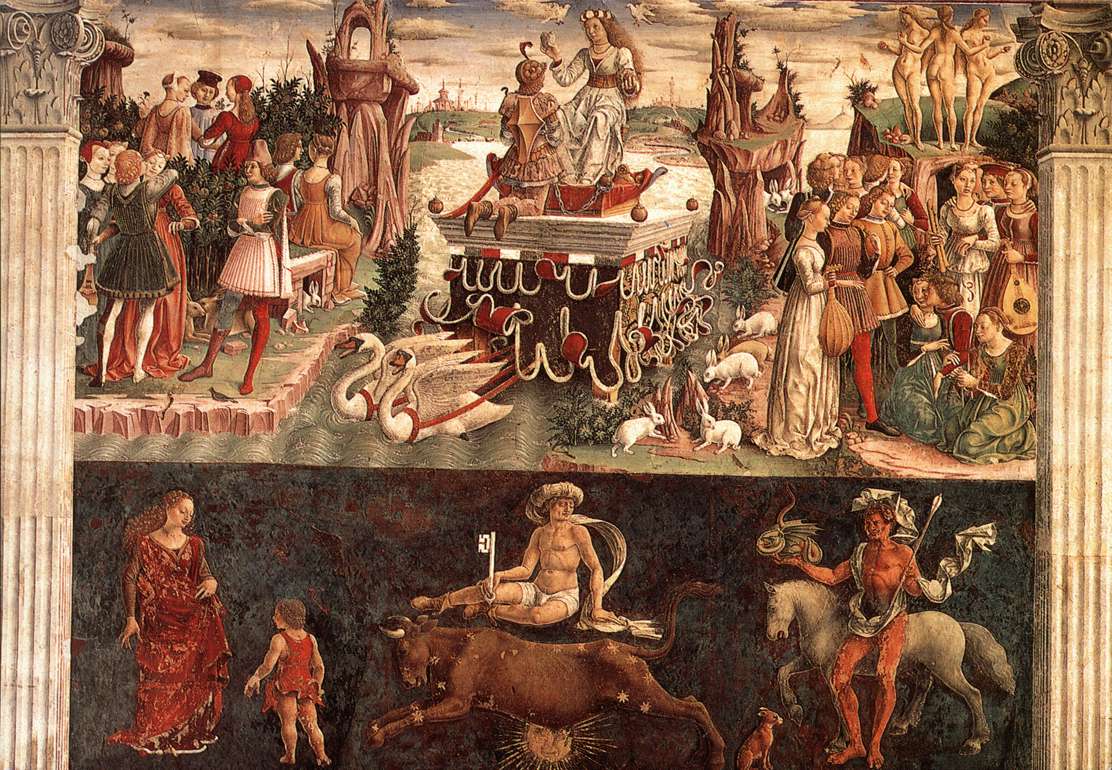 Francesco del Cossa, the upper registers of the month of April 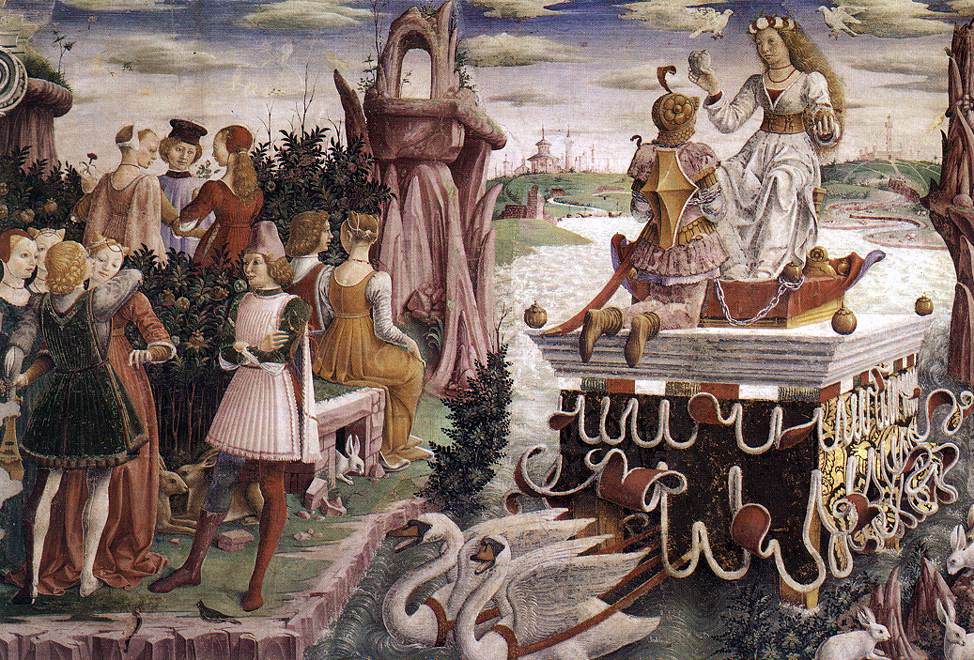 The chariot of Aphrodite

The sky of April is under the guardianship of Aphrodite (Venus). The goddess of love celebrates her triumph on a vehicle drawn down the waters of a river by two white swans. The vessel is adorned with curtains stirred by a lively spring breeze. Mars with his hands tied up in chains kneels before her.  To him is assigned the sign which is the diametrical opposite of Taurus – Scorpio.

The goddess’s long hair is held back by a colourful garland of flowers and a youthful Eros (Cupid) is portrayed on her belt shooting arrows at the two lovers. To the right and left of the scene there are two splendid gardens where the loves of the children of the goddess are blossoming: they are the young men and women of the court depicted by the artist with unusual realism caught in daring, sensuous embraces. To the left of Venus, the three naked Graces preside over the scene where at the feet of the young courtiers numerous rabbits and large hares, symbols of love, run around, further highlighting the nature of the whole scene.

The three decans with the Zodiac sign of Taurus 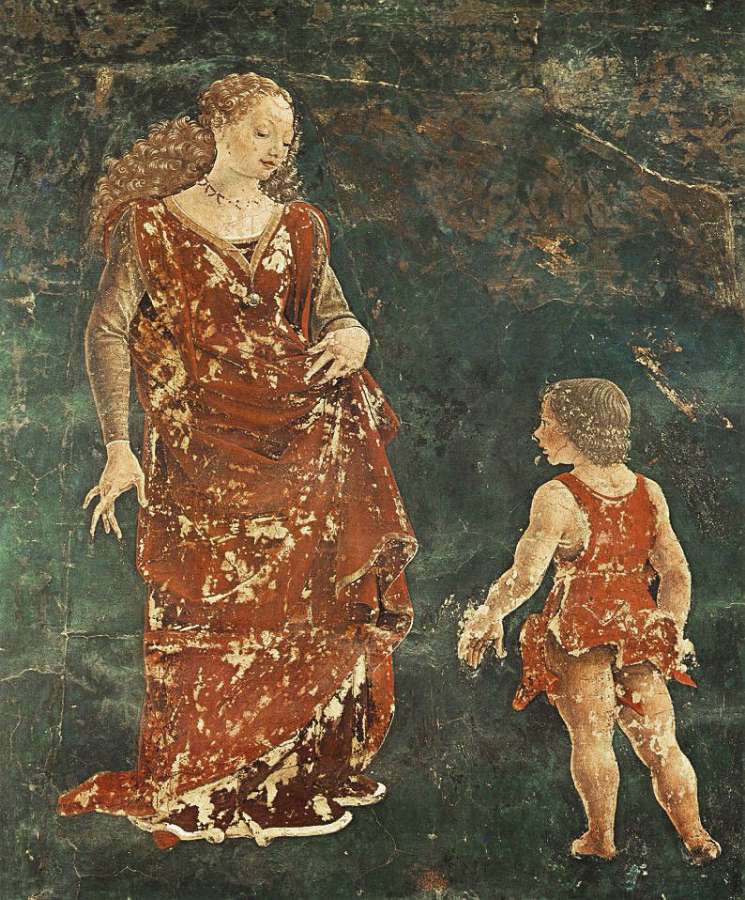 The first decan of Taurus

A woman standing, with long blonde, curly hair hanging loosely around her shoulders held back by a  ribbon; she is wearing a red dress which seems partly burned, and she gazes at a child (her son) who, standing before her, is wearing a dress of the same colour.

This description comes from the Indian sphere of Albumasar (Bertozzi 1999, 47-49); Jaffé [1932] 1999, 115). The image of mother and son goes back to the stellar configuration of the Pleiades who appear in this decan. From the union of Maia, one of the Pleiades, with Zeus, Hermes (Mercury) was born. The attribute of red dress, partly scorched, is connected with the loss of the brightness of the Pleiades: one of the seven stars was already burned up and no longer visible at the time of Aratus (3rd Century BC), (Aratus, Phaenomena, 257; see Bertozzi 1999, 47). 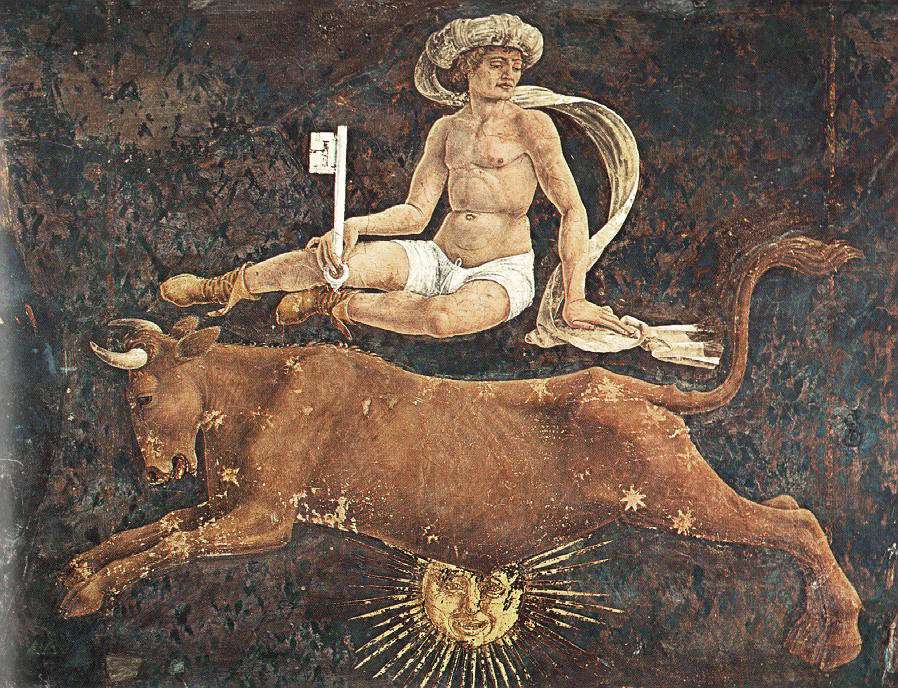 A naked man, wearing something resembling a turban on his head, and short ankle boots on his feet. In his right hand he is holding a large key. Similar descriptions can be found in the compendia of Leopold of Austria and Ludovico the Angle (Bertozzi 1999, p.49; Jaffé [1932] 1999, 115).

In Albumasar’s treatise, there is mention of a naked man with a head similar to that of a dog holding a key. This attribute suggests to us that this is Sirius, the bright star in the constellation of Ursa Major. The bull, Taurus, according to the astral myth cited by Hyginus (2-3rd AD), was placed in the heavens to carry Europa to Crete intact, and Jove had assigned to the dog, Canis, the duty of protecting Europa (Hyginus, De astr.,  II, 21, 1; II, 45, 1; see Bertozzi 1999, 49). 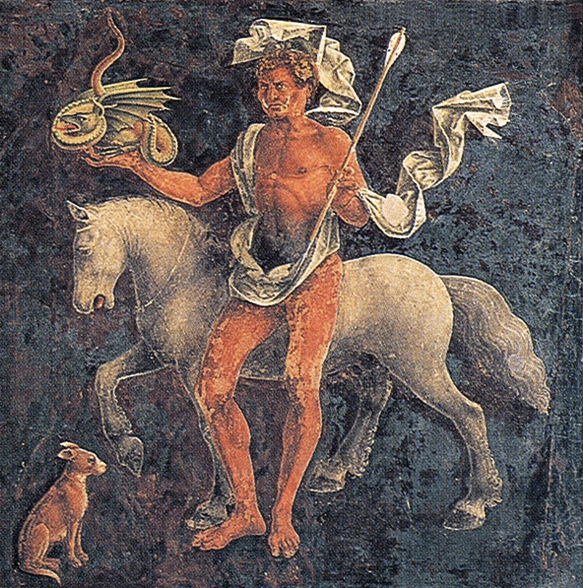 A man with dark skin, naked, with canine teeth similar to those of a boar; in his right hand he holds a winged snake encircling itself. In his left hand he has an arrow; behind him there is an image of a horse, and at his feet that of a dog.

The horse of this “Vir niger” is a reference to Pegasus, the horse that could fly as fast as the northern wind, Boreas. However, the rest of this figure is a complex blend of Albumasar’s Indian and Persian spheres, and Leopold of Austria’s compendium, as well as the texts on astrological and talismanic magic by Picatrix (Bertozzi 1999, 47-51; Jaffé [1932] 1999, 115). A point of reference for the stars is Aldebaran (an Arab term that refers to the fiery eye of the Bull), belonging to the seven stars that form the rainy Hyades. The term Hyades was translated into Latin with the term Suculae (the piglets), in accordance with the interpretation also accepted by Manilius (Astr. V, 126 ss.). The Latin translation originates from the Greek term meaning “boar”, alluding to the teeth that are a characteristic feature  of the figure for this decan (Bertozzi 1999, 50).

The artists of April*

April displays the same critical aspects expounded in the factsheet relating to March.

Here, as in the month immediately preceding it, the influence of the trip to Florence which, according to the critics, Francesco del Cossa took before arriving at Schifanoia, appears to be very strong. Many of the solutions expressed in the eastern wall are in fact unthinkable without a deep understanding of what could be seen in Florence in the sixties (for example, works such as the frescoed Nativity painted by Alesso Baldovinetti in 1460-62 in the Santissima Annunziata). This style, however, appears toned down compared to other works of Cossa such as the slightly earlier Pala dell’Osservanza of Dresden, and is perhaps due to contact with the novelties of figurative art in Ferrara on the artist’s return home.

Central, in this sense, is the figurative familiarity with the so-called "E-series" of Mantegna’s Tarot cards dated shortly before 1467 – and a result of the decans devised by Borso’s artist, Gherardo di Andrea da Firenze. The many similarities with the eastern wall of Schifanoia have led to the contentious screen-prints being attributed to Cossa. Although groundless, this suggestion can be corrected by placing Cossa in 1469 in the wake of the "Pseudo Tarots", as proved by the often noted resumption of work on the walls of Schifanoia that are attributable to him, for example the Wise Men in March and the courtesans in April.  On a deeper level, it would appear that his predilection for the way hands are articulated in poses of extreme elegance, with the little finger unnaturally distant from the rest of the fingers was modelled on characters painted by Gherardo da Vicenza. This aspect appears in Cossa’s works only from Schifanoia onwards. In his previous works – the Pala dell’Osservanza and glass windows of Jacquemart-André, for example - this stylistic feature is completely unknown.

So Cossa accesses this idea on his return to Ferrara after his travels to Florence and Bologna, before starting work at Schifanoia (1469), making it his own as of this moment and turning it into a genuine stylistic and figurative cipher.

The month of April is without doubt the most successful composition of the entire cycle. In fact, many of the fragments of the Triumph, a popular icon of Ferrara and the art of the d’Este, the vigorous decan on the right, and the figures of the common people running in the Palio are unforgettable. The variety of personal accents, from hairstyles to poses and facial expressions, compared with the other surviving parts of the cycle, justify reiterating that, if the realization of the decoration was governed by an iron fist, it was only in the fascia referring to Borso. In the other two, Prisciani must have confined himself to providing the general composition and indicating the iconographic attributes of the figures.

It would seem that the extraordinary invention of the page sitting on the painted frame, with legs invading the simulated real space, which has no parallels in the other surviving scenes, was all Cossa’s.

Finally, it should be remembered that the passage that now connects the Hall of the Months to the Hall of Domenico di Paris is almost completely original. Santo Brasca, from Milan, who visited Schifanoia in 1480, witnesses that from the Hall one could access the western wing by the Palace Chapel, and the eastern wing from the Hall of Stuccoes. It is plausible that the decorations continued over the door, as was the case for the windows. At the end of the nineteenth century this information was well known, as evidenced by the finding of Mazzolani who illustrates this very specific detail of April (Ferrara, Civic Museum of Ancient Art, inv. S/163).