Presentation of: The Fortune of Gertrud Bing (1892-1964). A Fragmented Memoir of a Phantomlike Muse, Peeters, Leuven 2020

Courtesy of the publisher, Peeters, and author, Engramma No. 171 presents premiering the Contents and extract of the Introduction to the first monograph dedicated to Gertrud Bing, philosopher and Professor of the History of the Classical Tradition, close collaborator of Aby Warburg, Director of The Warburg Institute from 1955 till 1959. The volume The Fortune of Gertrud Bing (1892-1964). A Fragmented Memoir of a Phantomlike Muse is now in course of publication for the series ‘Studies in Iconology’ directed by Barbara Baert (see the Presentation of the series in “La Rivista di Engramma” 165). 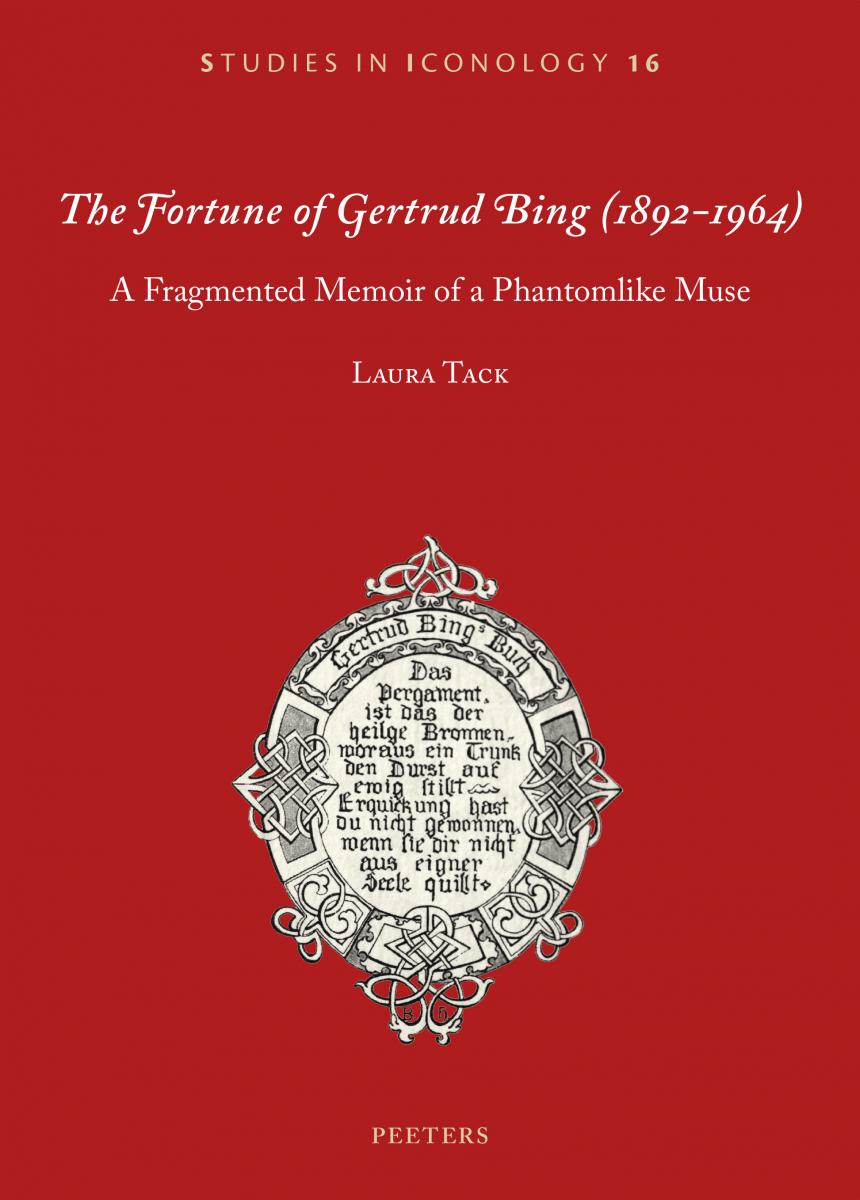 When Gertrud Bing was appointed as Professor of the History of the Classical Tradition at the University of London in 1955, she only had a few publications to her name. This may come as a surprise by today’s standards, yet Gertrud Bing is one of the most important links in the network around Aby M. Warburg (1866-1929).

Who was Gertrud Bing and what was her personal contribution to Warburg’s scientific project? The answers to these research questions need to be sought in unusual places. It is perhaps not in her small number of publications, but in Bing’s many quiet achievements – quiet at first glance – that one will discover the most about who Gertrud Bing was, and what she meant to the Warburg school. Bettina Götz calls in this respect for a feminist Spurensuche [1] for the lost signs of Bing’s presence.

Gender theory seems to have largely abandoned the path of victimisation in recent decades, and is therefore careful not to present women as passive victims of an oppressive patriarchal society. Instead, emphasis is placed on “female agency” and “on the continuous destabilizing pressure that women’s agency has exerted upon culture: women’s efforts to resist masculinist cultural hegemony produced counterefforts to absorb, counteract, and appropriate their resistances” [2]. In line with this point of view, this essay on Gertrud Bing is by no means intended as the martyrology of a woman who was relegated to the so-called ‘inferior’ spheres of the academic world. This text rather reports on a quest to discover how Gertrud Bing took up her personal agency – in her own distinctive way.

This deliberate choice for a female perspective can also help clarify Warburg’s own research interests. With Warburg’s fascination for the nymph, a picturing of ‘the feminine’ enters into the centre of his thinking. However, Warburg almost never voiced opinions about the role of gender in the structure of society [3]. Nor does it seem that he actually admitted women to his intellectual universe. Gertrud Bing, it turns out, was the rare exception. What does this say about Warburg’s attitude towards women? And how did Bing influence his view on women? By asking these questions, I merely want to illustrate the relevance of this contribution – these questions will not make up the heart of my presentation. My main goal is to map the agency of Gertrud Bing in this intellectual universe.

I do this in the way that Gertrud Bing herself would have probably preferred. When she planned to write the biography of Aby Warburg’s life and work, she not only intended to cover his scientific publications, but also to consider “the enormous amount of Warburg’s correspondence with scholars all over the world” [4]. By starting from the letters, she confirmed, she would be in the position to make Warburg’s unique voice resonate again:

According to Bing, then, the ideal biography of Warburg ought to merge the personal with the intellectual. It should be “a book consisting of two parts: a biography supported by Wbgs letters and an analysis of his thought” [6].

In Bing’s person, the two aspects were united as well. The many letters she wrote – which are kept at the Warburg Institute Archive to this day – show that she was a gifted letter-writer, with an often impassioned, highly literary style and with a keen eye for interpersonal interaction and concrete details. In addition, she produced a modest scientific oeuvre, which is equally worthy of attention. The underlying aim of this essay, therefore, is to interweave the overview of Bing’s intellectual achievements (part II) with the personal and the anecdotal (part I) that pulsates under her academic language, revealing in this way, as Gertrud Bing herself cleverly remarked in one of the first letters she wrote to Aby Warburg: “Jede menschliche Erweiterung kommt doch auch der Arbeit zu gut” [7]. What one experiences as a human being will also find its way, in one way or another, into the academic oeuvre one leaves behind. As will become clear, this is not only the case for Aby Warburg, but also for Gertrud Bing.

I start with a biographical sketch in the first part, in which I, as a feminist Spurensucher, try to form an image of the life of Gertrud Bing (part I). This emphasis on Bing’s life is necessary to understand her work, especially since it points our attention to what she accomplished in the quiet moments between the publications that make up her small oeuvre. In the second part, I will then examine Bing’s achievements in light of the overarching theme of Fortuna. I deliberately choose to address a subject that fascinated Bing herself, and that is also one of the central research themes of the Warburg school (part II).

I. Of Muses and Phantoms. Fragmented Traces of Memory

She knew how to interpret any hint and any jotting of a name or of a notion, and how to fill in any gap Warburg himself had indicated. Having worked closely with the ageing scholar whom she accompanied on his last journey to Italy and who would sometimes dictate his first drafts to her, she had entered into his ideas to the point of identification (E.H. Gombrich, Aby Warburg. An Intellectual Biography, Oxford, 1970, pp. 1-2).

“Sie stand anderen zur Seite und wußte sie zu inspirieren” [8]. It is clear that Ernst Gombrich saw Gertrud Bing as the muse in the circle of scientists around Aby Warburg. However, a retrospective of the life of this woman-turned-muse is a good example of how time moves in a merciless stream of oblivion. Drawing up a biographical sketch of Bing’s life is not easy. There are the dates associated with the important moments, turning points and upheavals in her life. These are the factual beacons that stand out clearly in the course of her life, and are clearly discernible to anyone who wants to undertake a biography of Gertrud Bing. However, what flows between these beacons – the thoughts, the feelings and the whole existential outlook of the person in question – seems to elude us.

So, where to start? The logical first step seems to call on those who knew Gertrud Bing during her life, and to investigate how her direct colleagues and friends remembered her. This in itself is an interesting exercise. Warburgians are known for their caution with the word ‘memory’ (Greek mnèmè, mnèmosynè), and for being even more cautious with the word ‘forgetting’. The various In memoriam [9] published after Bing’s death, at first glance, paint a clear picture of her life. One might ask, however, to what extent these texts reflect the mindsets of the writers instead of the true identity of the honouree. In addition, many of Bing’s friends realised after her death how little they knew Gertrud. When Michael Baxandall looked back on his time as an assistant at The Warburg Institute, he wrote the following: “When Bing died it was a common experience among her friends to realize suddenly that, close to her as they felt, they knew very little about her” [10].

Moreover, the fact that many of her close colleagues, collaborators and friends ultimately knew little about Bing’s personal life is not only due to their forgetfulness or lack of attention. Gertrud Bing herself did not make it easy for her future biographers. After her death, presumably at her request, all personal documents were destroyed [11].

This act seems incomprehensible, but it is in any case in keeping with a character trait that emerges in various biographical notes about Bing: she had a tendency to forget herself. Bing’s enormous dedication to the Kulturwissenschaftliche Bibliothek Warburg (K.B.W.) meant that she almost completely buried herself in her work at the institute, and minimised her contribution to its success [12]. This reserved, dutiful and modest attitude in regard to the work of her teacher Aby Warburg also characterises her at a later age, when, at the death of Henri Frankfort, and after years of loyal service, she eventually became the director of The Warburg Institute in 1955. In a letter to her cousin, Eric M. Warburg, who emigrated to America, she wrote the following about her appointment:

It is a tribute to your uncle that I should have been chosen to carry on his work into another phase, and to see the Institute into its new, bigger home on the main University site, because I am still in the direct line of descent from him [13].

Bing considered her appointment an honour, not for herself, but for her mentor. Her modesty and affection for Warburg’s project did her credit, and was also much appreciated by her friends and colleagues. A biographer on the lookout for sensational autobiographical details has little to work with here, and is left reaching for something more substantial. One might begin to wonder whether, in the case of Gertrud Bing, it is even possible to see through the mists of the Lethe to discern an image of Bing on the other side that, beyond the facts, provides an insight into Bing’s inner life.

In view of the fact that this contribution seeks to trace Gertrud Bing’s intellectual mindset, I want to do just that: to retrieve Bing’s inner motives from oblivion, in order to find in them a basis for her own scientific project. As an antidote to the Lethe, I hope to find Mnemosyne, the mother of the muses and the personification of memory, and will try to pull Gertrud Bing’s life out of the river of oblivion, into the light of recollection and memory.

“Sie stand anderen zur Seite und wußte sie zu inspirieren”. It is clear that Ernst H. Gombrich saw Gertrud Bing (1892-1964) as the muse in the circle of scholars around Aby M.Warburg (1866-1929). Others have compared her to the figure of the nymph, which was essential to Warburg’s thought. Indeed, with Warburg’s fascination for the ninfa fiorentina, a picturing of ‘the feminine’ became central to his thinking. However, Warburg almost never voiced opinions about the role of gender in the structure of society. Nor does it seem that he actually admitted women to his intellectual universe. Gertrud Bing, it turns out, was the rare exception. Who was Gertrud Bing and what was her personal contribution to Warburg’s scientific project? This essay intends to map the agency of Gertrud Bing, in a way that she herself would have probably preferred. According to her, the ideal biography ought to merge the personal with the intellectual, since, what one experiences as a human being will also find its way into the academic oeuvre one leaves behind.