A Clue to the Riddle of the Dareios krater / ‘vaso di Dario’?

One of the great rewards for having compiled Pots and Plays (Taplin 2007, hereafter P&P) has been the amicable to-and-fro of the Italian “Seminario Pots & Plays”, epitomised in the publication of Scene dal mito (ed. Bordignon 2015). Another has been combative, but always courteous, debate with Luca Giuliani. His latest salvo, Giuliani 2018, takes issue with (among other points) the “index of signals” that I compiled in P&P 37-41. This was offered as a collection of possible iconographic indicators, sometimes stronger, sometimes weaker, towards a connection between a vase-painting and tragic theatre. Part of Giuliani’s case against this (pp.131-134) concerns the semantics of the word “signal” (as he says, 132-133, "signals" mean instructions, even commands, like traffic signals; but in everyday English the word can also extend to something more like signs or indications which are not imperative or infallible), but his key claim is that, while he agrees that there is indeed a connection between the relevant paintings and tragedy, this is for him solely a matter of the plot, the version of the myth that is appropriated. This is as opposed to my argument that the plot is mediated through performances of the tragedies, so that, although the play is not explicitly portrayed, the appreciation of the viewer is further enriched through knowing the myth as enacted in living theatre. Hence my “pots and plays” versus Giuliani’s “pots and plots”.

One of the “signals” that Giuliani takes exception to is what I called “the little old man (paidagogos figure)”. We have over 50 examples of this strikingly recognisable slave or menial figure with his unruly white hair and beard, often stooped and with a knobbly old staff. He nearly always has a short cloak and long sleeves of soft material; often he wears a conical travelling-hat and high boots, sometimes conspicuously ornate. J.R. Green (Green 1999) compiled an invaluable catalogue of his appearances, where he argued both that his portrayal is derived from the theatre, and that his presence in a mythological setting is a strong indication that the scene points to a particular play known to the viewer. Giuliani does not doubt the old man’s theatrical origin, but insists that paidagogoi, like nurses, are appropriately present in the iconography of many mythological narratives without indicating that any play is relevant. This is just one critique of my alleged “signals” that lead him to his crucial conclusion (p. 134): “The reason why the signals of theatricality discussed by Taplin turn out to be unreliable is quite simple: none of these elements was actually intended to function as a signal.” (Giuliani’s italics).

Such an appeal to artists’ “intentions” have long been regarded as methodologically rather dubious in literary studies, if only because they are ultimately unverifiable, but I have other reservations apart from that. Firstly the old man is not always a paidagogos, and can have some other specific role in the narrative. Thus on the attractive krater P&P 68 (pp. 193-196), which tells the story of Melanippe’s giving birth to twin sons, the old man who has found the babies in the cow-shed is labelled as ΒΟΤΗΡ. He has his role in a particular (Euripidean) version and is not just an iconographic ‘extra’. 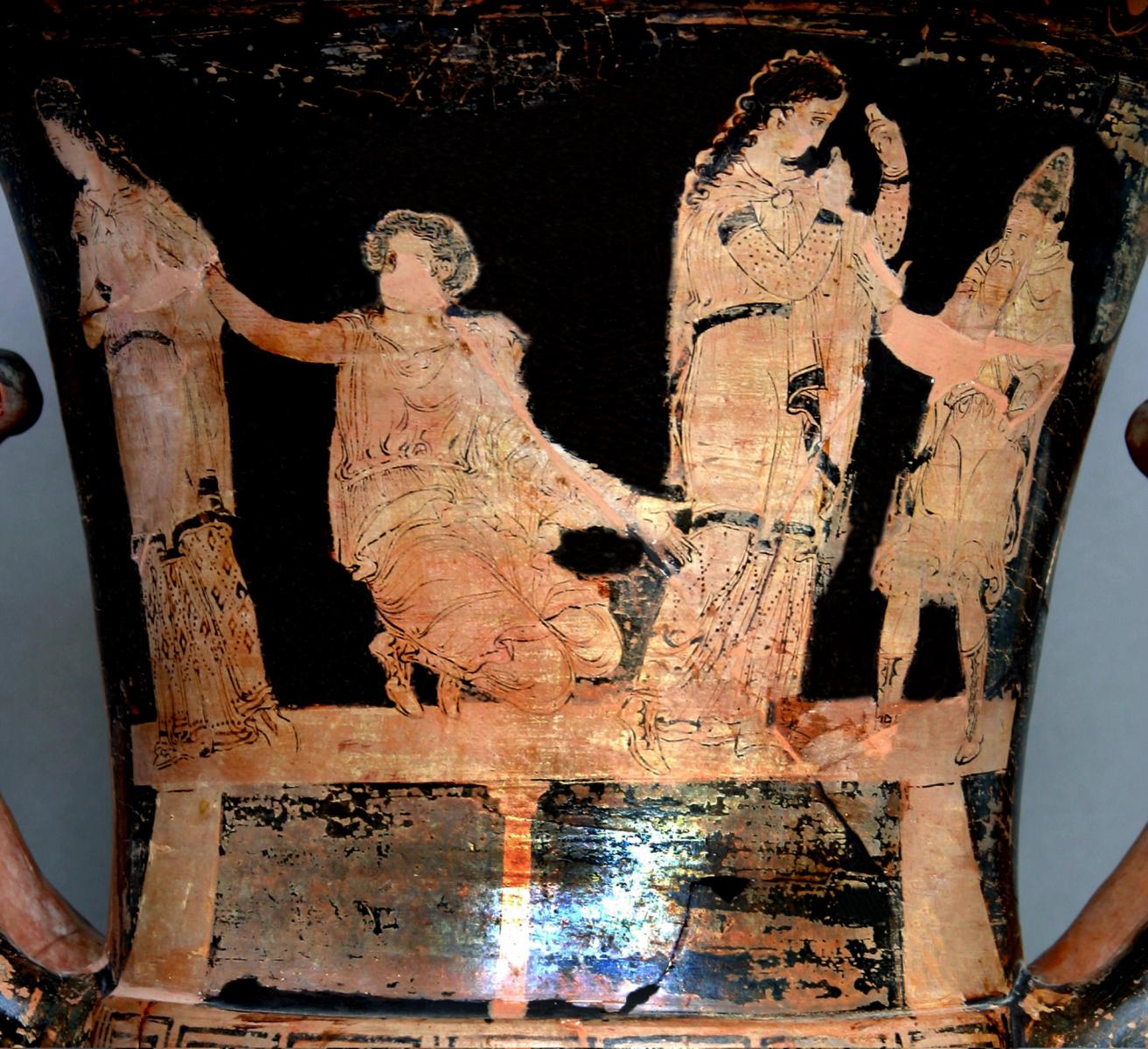 Secondly there are two instances where there patently is direct allusion to the theatre. These are, admittedly, Sicilian not Apulian, but it is clearly the same little old man. Both were probably painted by the hand known as the Capodarso Painter, dating to around the 330s; they have become justifiably well-known because they directly invoke the performance of tragedy (there are two important recently published discussion of these: Csapo, Wilson 2020, 398-403 and Bosher 2021, 150-153). The one excavated at remote Capodarso, P&P 105 (261-262), has the “little old man” at the right hand end of a rather small and rudimentary stage which holds four tragic figures, the other three female [Fig. 1]. There is no need to discuss here the possible play and so forth: what matters is that he is taking part in an explicit performance evoking a particular tragedy. The other is (of course) the krater fragments, P&P 22 (90-92), excavated at Syracuse in 1969, which are widely agreed to capture a particular moment in Sophocles’ Oedipus (the King) (this has been questioned in a blog-post by Edith Hall on the grounds that the two children are more likely to be boys than girls; I discussed this question, and set out to reinforce their identification as Antigone and Ismene in Taplin 2017). According to this identification the “old man” on the left is the herdsman from Corinth, who has brought the news of the death of Polybus, and who goes on to make crucial revelations about how Oedipus was taken as a baby from Cithaeron to Corinth and given to Polybus. Once again the figure is explicitly identified as a character in a tragedy, not just an iconographic convention. 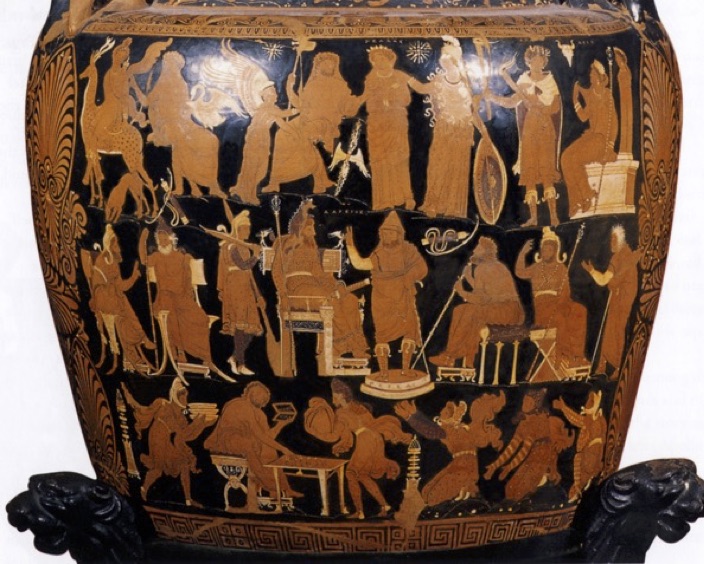 The most enigmatic little old man figure of all, however, and the one who poses the most challenging question of whether he is or is not intended as a signal of theatricality, appears on the monumental volute-krater (1.3 metres high!) which is the name-vase of the Darius Painter, the acknowledged maestro of Apulian vase-painting of the second half of the fourth century [Fig. 2]. He and his workshop were amazingly prolific, and often produced intriguing and unusual mythological scenes, many of them related – whether through plot or through play – with tragedy (no fewer than 26 of the 109 vases selected for P&P are attributed to the Darius Painter). Some of the scenes are so unusual and so elaborate that it seems quite likely that they were high-prestige bespoke commissions. And in that case it is very interesting that so many of those with known provenence have been found in tombs in Peucetia and the northern Messapian-speaking areas of Apulia. That is the case with this vase, which was excavated on 15 August 1851 at Canosa (for details and bibliography see Todisco 2003, 468-469, Ap. 182 and 557-558 on the “ipogeo del vaso di Dario” at Canosa).

Even among this painter’s bold initiatives this one stands out: its main subject draws not on heroic myth, but on more recent history, and it portrays in some detail a world that is neither Greek nor Italian, but Persian. The main picture encompasses no fewer than 22 individual figures on three levels. The bottom “servile” row shows the methodical finances of Persian rule, with gold being brought to an accountant, while some subjects plead for mercy or for time to pay their tribute. The top “divine” row has five easily recognised Olympian gods, and three female personifications who are identified by inscription as Hellas, Deceit (ΑΠΑΤΗ) and Asia, probably meaning Asia Minor. Athena is leading Hellas towards Zeus and Nike, while Deceit stands by a suppliant Asia; this is the nearest that this iconography comes to a narrative. The middle “rulers” row is framed by four seated and one standing counsellor-figure. In the centre, seated on a grand throne and with a very Persian bodyguard behind him, is the one human figure identified by an inscription: ΔΑΡΕΙΟΣ. This could, in theory, be either the successful (mostly) imperial king well known from Herodotus, who ruled from c. 522 to 486; or – unlikely – it could possibly be the Dareios who was briefly king from 336, and who failed, though bravely, to stop the unstoppable advance of Alexander. 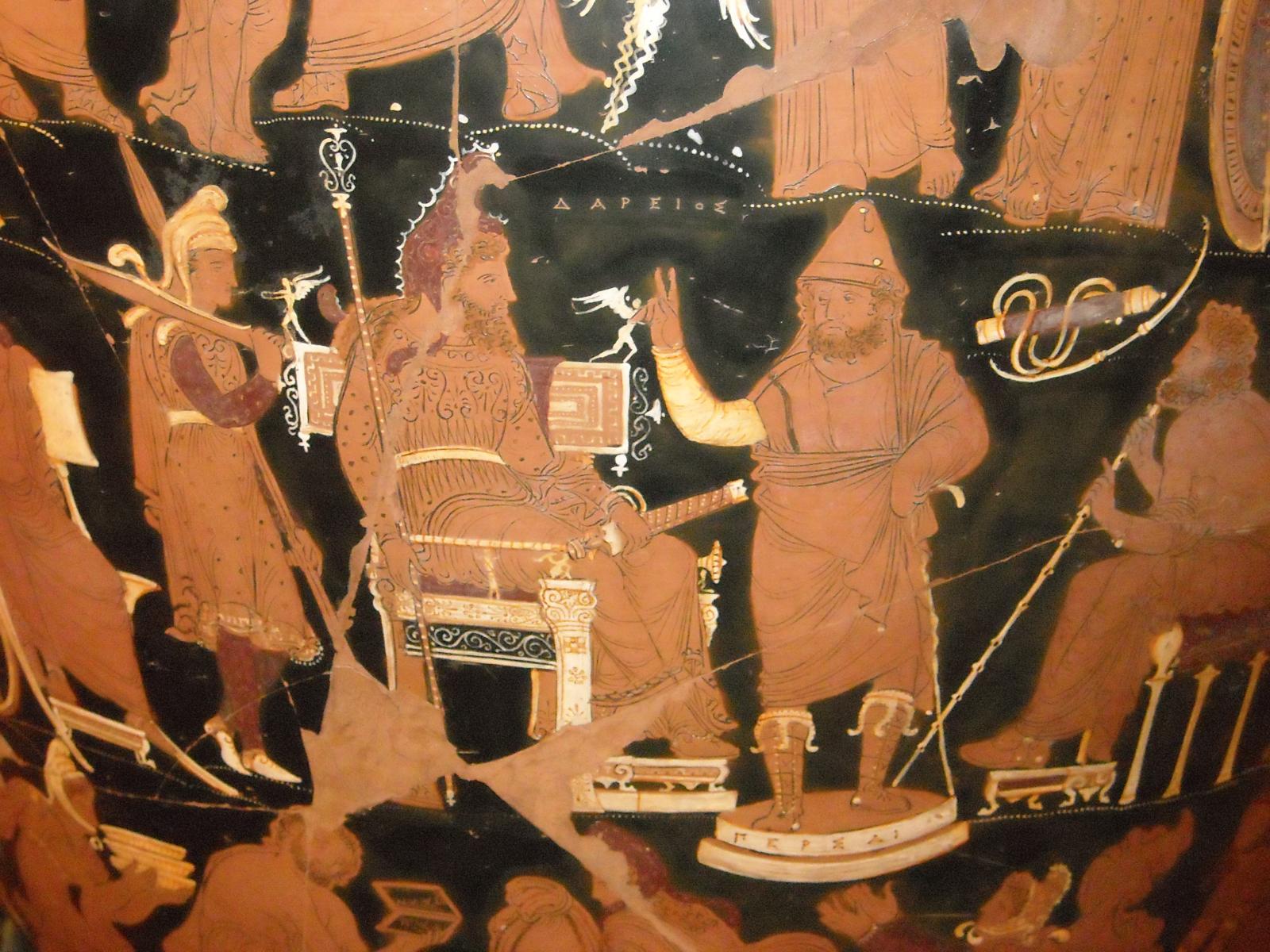 So the vase poses a kind of enigma: what does it convey to the viewer? Is there a story here? Does it honour Dareios, or does it show his failure? If there is a key to this enigma, it seems to be the second central figure of the composition, who stands in front of Dareios, holding up his arm in a gesture that is usually taken to signify warning [Fig. 3]. Here is our familiar “little old man”, though in this case he is not shorter than the others in his row. He has a conical traveller’s hat and fancy boots, and he stands on a circular plinth inscribed ΠΕΡΣΑΙ. Why did the artist put him there? What was he meant to suggest to the viewer of this grand showpiece?

When I discussed the Dareios krater as no. 92 on pp. 235-237 of P&P, I was scrupulously agnostic, including two opinions which I would no longer maintain. First: “The possibility should not be ruled out that he is wearing this tragic outfit because old anonymous figures were conventionally portrayed like this by 330 B.C., whether or not they had anything to do with tragedy” – a sentiment very much in keeping with Luca Giuliani’s objection to regarding such figures as a “signals”. But this vase does not show a mythological story or contain any matter where a paidagogos – or even a herdsman – is obviously appropriate. This old man is not just a by-stander, he is central to the whole composition. Secondly: I said of ΠΕΡΣΑΙ on the plinth, “This is presumably the title of the whole painting”. But the there is no point to adding a picture-title (not a common convention in Apulian vase-painting in any case): it is perfectly obvious that the lower two rows are Persians. So I have now come round to the view that ΠΕΡΣΑΙ is there because it is the title of a tragedy. And in that case there can be little doubt that this must allude to Aeschylus’ Persai of 472, famously re-performed at Hieron’s Syracuse, and cited by title in Aristophanes’ Frogs (1026-1027).

If this is followed through, the plinth cannot possibly be indicating that this painting in any way represents the action of Aeschylus’ play. For one thing the messenger there is a Persian soldier returning from the war, and cannot be pictured as a Greek old man. Even more obviously the Dareios of Aeschylus is not only already dead, but he actually figures on stage as an apparition summoned up from the underworld. I suggest, then, that the old man is there on the vase as a kind of challenge or enigma, and that “ΠΕΡΣΑΙ” is the key to it. He signifies that Aeschylus’ Persai is somehow a warning to Dareios. Assuming that this is the great king, father of Dareios, then he is being warned that, despite his imperial incursions into in Asia Minor, the future Persians will suffer defeat and reversal (Margot Schmidt, 1982, offered an ingenious alternative chronology, setting the scene on the vase during the Ionian Revolt).

Herodotus 5.105 tells how Dareios, after hearing of Athenian intervention against the Persian advance in Asia Minor, had a servant say to him three times before his meal, “My lord, remember the Athenians”. This detail is even reiterated at 6.94 before the expedition against Greece and Athens in particular in 490. My best shot at a solution to the riddle of this vase is this: just as Dareios’ servant reminded him of Athens, so the Greek servant on the vase reminds the viewer of Persai. So the composition shows the great Dareios at the height of his wealth and power, and also simultaneously “prophesies” the defeat of Xerxes in 480, as immortalised in Aeschylus’ tragedy. Might this even allude to the contemporary exploits of Alexander as well as the events of 480-479?

If this admittedly rather convoluted answer to the riddle of the old man is right, then he is indeed a striking, if highly unusual, employment of one of my signals of theatricality, and one that is intended to function as a signal.

The article broadens the perspectives already developed in previous works dedicated to the relationship between ancient tragic theater and vase painting, starting from precise iconographic indicators recognizable in Greek vases. In particular, it demonstrates how many references to the theatrical plays might be perceived by the owners of the vases, through an accurate selection of elements described in the tragedies as signals of the mythical stories portrayed on them. The case study of the famous ‘Cratere di Dario’ from the Apulian area at Canosa offers a clear demonstration of this method.