A presentation of the International network Διάζωμα and of the Conference in Venice (11-12 June, 2019) 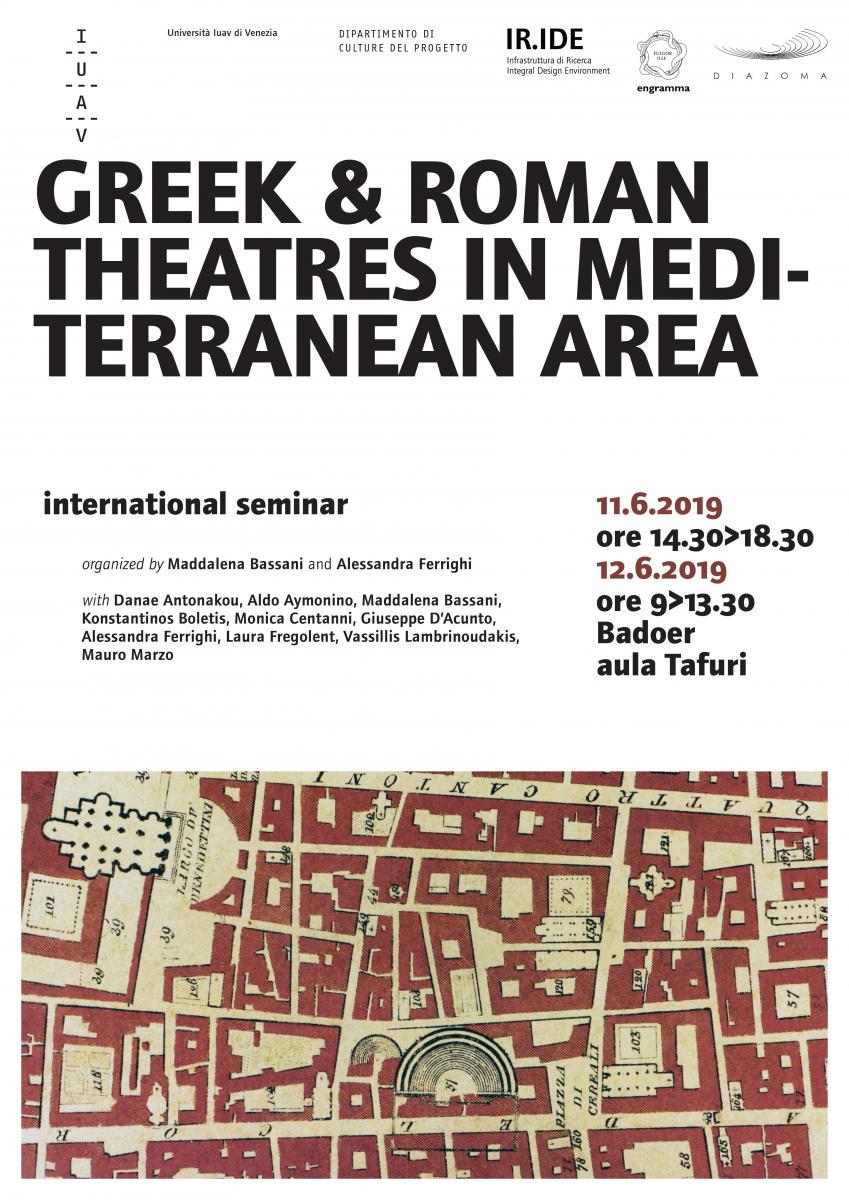 Since 2010 the Centro studi classicA of the Università Iuav di Venezia, under the direction of Monica Centanni, has been devoloping a census of Greek and Roman theatres and buildings that hosted shows in the Mediterranean area. A first mapping was provided in Engramma n. 77 (January-February 2010), thanks to the information that in the meantime had gradually emerged from scientific works, later published (see the seminal Memoria del teatro, edited by P. Ciancio Rossetto and G. Pisani Sartorio, Rome 2002).

The online accessibility of this first mapping has made it possible to start a fruitful international collaboration, in particular with the Διάζωμα association (www.diazoma.gr), which has long been active in Greece in promoting, protecting, restoring, and enhancing ancient theatres. Διάζωμα is also engaged in organizing cultural initiatives aimed at making the heritage known to the general public. Indeed, in the ancient era, theatres constituted not only a strong marker of the landscape and the cities in which they had been built, but above all they have been an element of identity for common people, who were the spectators of the theatrical festivals.

This cooperation gave rise to a close research and comparison relationship between the working group of ClassicA Iuav and the members of Διάζωμα, with meetings in Athens on 1 June 2018; Athens 30 March 2019; and in Venice, 11-12 June 2019. The international team aims at defining a new way of cataloguing the places of the ancient spectacles of the Mediterranean basin. The descriptive card that was specifically created collects historical and archaeological information for each building, as well as data relating to today’s use / disuse of these structures. These cards will soon be (by the upcoming January 2020) uploaded and managed in the Διάζωμα portal and will be available to anyone who may be interested in the buildings for Greek and Roman shows, as well as in the cultural activities that can be proposed there today.

The opportunities and the criticalities and variables that such a census may entail were discussed at Università Iuav di Venezia, in the international seminar “Greek & Roman Theatres in Mediterranean Area”, on 11 and 12 June 2019, which saw the involvement of scholars and experts from various disciplines: archaeologists, architects, historians of ancient theatre, restorers, curators of cultural heritage, as well as experts in the restoration and graphic restitution of buildings (still visible and usable or only partially preserved).

In the first session, Monica Centanni introduced the seminar with the speech The International Network of Ancient Theatres: First Steps for a Long-term Project. Danae Antonakou presented the contributions that had been exposed in Athens on March 29 2019 during the seminar of the network of theatres, in her speech Un resoconto dell’incontro scientifico della Rete Internazionale dei Teatri Antichi (A Report of the Scientific Meeting of the International Network of Ancient Theatres). Vassilis Lambrinoudakis, in his speech Ancient Greek Theatres in Modern Use, dealt with the revival of Greek tragedies during the early twentieth century, which led to a renewed interest even in the ancient places of acting. Ancient theatres returned interesting together with their recovery as places to revive the ancient plays. Konstantinos Boletis focused on the relationship between architecture, restoration, cultural heritage, and economics in his intervention Ancient theatres and the “Διάζωμα” association: Bridging cultural heritage with modern society and economy in Greece.

Maddalena Bassani and Alessandra Ferrighi introduced the theme of cataloguing theatres according to the standards adopted by the Italian Ministry of Cultural Heritage, and presented the theatre card format as proposed by the network, in their contribution Cataloguing ancient monuments: international standards and specific needs.

After an introduction on ancient theatres in Italy and Spain and on the theme of the enhancement of archaeological sites, Mauro Marzo and Giuseppe D'Acunto, in their presentation Shaping ancient theatrical buildings: from historic representation to digital modeling, showed how new technologies can give a contribution to the knowledge of places through 3D reconstruction.

In the second session, Konstantinos Boletis, The current restoration program in the cavea of the Theatre of Dionysus, introduced the activity of Διάζωμα, the association created in 2008 in Greece through the work of volunteers with the aim of protecting ancient sites and monuments related to drama, integrating them into contemporary life.

Finally, attention was given to the work of the students of the class “Greek and Latin sources for the History of Art and Architecture” (held by Monica Centanni and by Maddalena Bassani). They presented some examples of theatres of Roman Venetia et Histria (Decima Regio Augustea) with lists concretely evaluating the operability of this census. This way, we put into play – if we may use the word ‘play’ – the future ‘actors’, the future graduates in architecture, who will have to manage such fragile and yet precious sites, full of cultural implications. Chiara Chiasera, Cesare Sartori, Vincenzo Zappia presented a study on The Roman Theatre of Altino; Jacopo Barbon, Marco Bonotto, Allegra Sieni on The Theatre of Asolo; Cristina Bicego on The Concordia Roman Theatre; Giada Cavaggion, Filippo Cecchinato, Leonardo Cosaro and Francesco Pasinato on Verona Arena or Amphitheatre.

The results of the meeting are now accessible on the Greek & Roman Theatres in Mediterranean Area website, which presents a historical map provided by the Centro studi classicA of the Università Iuav di Venezia, in collaboration with the Associazione culturale Engramma. On the one hand, the website introduces the objective of the research project – that is to carry out a methodological discussion initiated by experts from different disciplinary sectors; on the other hand, it ensures the evaluation of the wide effects on the general public that such an initiative can have in both the short and long term.

Summary of the conference Greek & Roman Theatres in the Mediterranean Area (Venice, 11 and 12 June 2019)

The presentation illustrates a international network organized by Università Iuav di Venezia and Association Διάζωμα. In particular, it presents the results achieved in an international workshop held in Venice in June 2019, in which objectives, methods, and outputs of a research project dedicated to the study and enhancement of ancient Greek and Roman theatres in the Mediterranean area were proposed. The project is coordinated by the Centro studi classicA – Iuav, in collaboration with the Research Infrastructure IR.IDE – Iuav, and the Greek Association Διάζωμα. The international workshop represented a great opportunity to share case studies among scholars, experts, and students in order to discuss opportunities, criticisms, and perspectives in the cultural heritage redevelopment.